The best sunset around

I have a friend who is constantly keeping score in her head - with factors that at first glance might seem trivial but are really very wise indicators, when you think about it, like food, and sunsets, and the type of beer you take out on a boat. For instance, if she likes what you order at a restaurant, she gives you dibs for "trading power." In fact she is from such a foodie family that when she and her husband go out to eat with their in-laws, they nibble on their actual entrees, then all pass to the left, again and again until their entree gets back to them; sort of a foodie's game of operator. (We did this with them once, of course years before H1N1, and even without the germ implications I did not take to this method of eating. When I got back my plate, there were only scraps left, and all the good bits had been scarfed right up. I am much more of a stick-your-fork-in-your-husband's-food sort of sharer. I have no idea where I got this; my family does not like to share at all. It's family lore that my Grandaddy once stuck a fork in the back of my mother's hand when she tried to sample from his plate. My father once, just recently, invited me to try something he ordered and I nearly wept with gratitude and wonder.)

But I didn't mean to get into a treatise on sharing, although I now see its potential for character analysis. I did mean, however, to get into my friend Rachel's labeling. She once told me that our friend Liz had the best porch for sunset drinks. Period. Now, we have a pretty good western aspect (in fact just today my friend Todd said it might just be the best around these parts). She's been out here and while she didn't mention the sunset, she did say it was like going to Italy. (I'm still not sure why, I was not actually here that weekend.) Italy is pretty good.

But we do have these killer sunsets. Take the other night for example. I'd been cooking up a storm all day, as if to keep pace with the weather outside, maybe to ensure that if we had to be stuck, it was at least going to be tasty. Maybe I was just building some kind of food fortress against the elements. Anyway, we got out our chewiest Cabernet and stoked the fire. That is when I realized I had no cashews. My Grandaddy, he of the fork, always had a dish of Planter's dry-roasted peanuts with his gin; my uncle John has the same predilection. For me, it is cashews. I buy them raw and whole, sprinkle them with olive oil and sea salt, occasionally strewing some rosemary or chopped bacon with, and brown them under the broiler. I put a few in a small pottery dish and savor each one with my cocktail. If my children stick their fingers in - well, let's just say that I too can wield a fork.

So here I was, with 30" of snow on the ground and more coming, and the cashew jar registering just a few lame shards and salt. Did I panic? No, but I was not happy. Until I remembered a bag of beautiful Brussels Sprouts in the garage fridge, purchased in my snow fever for no particular purpose other than it seemed like, if I was going to be stuck in my house for a few days, it would be good to have them on hand. So I halved them, and gave them the cashew treatment. Problem solved. 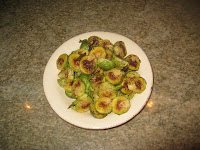 Pre-heat oven to 400 degrees. Trim bottom off sprouts and any brown leaves. Cut in half length-wise. Oil baking sheet. Place sprouts, cut half down, on baking sheet and spray oil over, then sprinkle with salt. Roast 10 minutes, or until bottom is carmelized. Turn over and brown other side, about 5 minutes more.


So I had my cab, and my carmelized tender morsels of goodness that were not cashews. I took a deep breath. The snow had finally stopped. And, after dumping three feet of snow on us in one day, the gods, as if laughing at us for trying to control our world, brought forth the brightest smile since Dorothy got home to Kansas. I put down my drink and took the pears to the table outside in the snow.

This is a recipe my mother has been making for years. She calls them "wrinkled pears." And they are. You cook these babies so long and so slow, they have more crevices than a sumo wrestler after a long tub. But renaming them "Sunset Pears" could be constructed as valid. Number One, you start with firm Bosc pears, which, in their prime, have the mustard and pink tones of a perfect day's end. Number Two, they are dinner's ideal finish - not too sweet and smooth, as soothing as a down pillow. They are the perfect treat when you are feeling like maybe you don't so much want to work off the calories for a treat (as my neighbor says, if I have to be on the treadmill an hour for this wine, I better enjoy it.) And number three: well, see for yourself. 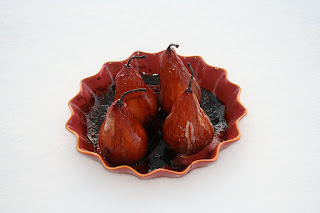 Heat oven to 300 degrees. In a large roasting pan combine the port, honey, star anise, cinnamon sticks, peppercorns, vanilla bean and raisins. Don't obsess if you don't have all these spices. I frequently forget one of them. Star anise, though hard to find, is worth procuring for just this recipe. They are beautiful things, and I often put one on each plate just for the effect.

Slice a small round from the bottom of pears, so they stand. Place in pan.

Bake pears, basting every 15 minutes, until the skin is wrinkled and the pears are tender, about 2 1/2 hours. Put each pear on a plate and pour syrup over.