Every July my uncle John comes to visit. He brings coolers of produce: beets, peppers and beans in abundance. And, if we are lucky, one tomato. This tomato is to represent all the tomatoes grown in Indiana that my father (who grew up in Indiana) will not be eating come August. This tomato is not yet as red as poppies, nor as sweet as summer rain, but it signals potential.

We wait for the lunch that we will slice up the tomato and taste it, (my father generally does this without announcement, and later adds that we should try a slice when just the end is left).

But these past two years this has not had to be our only chance -- my uncle wraps the tomatoes, nearly ripe, up in tissue and careful cardboard packaging and sends them via FedEx. This year he marked them with numbers and sent along a small menu with the varieties: 1. Keepsake, 2. Goliath, 3. Sun King, 4. German Pink, 5. Raad Red. And they are very good. 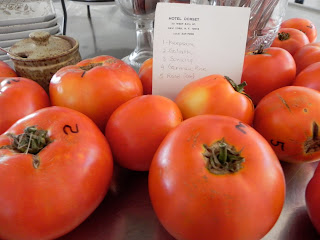 i
Of course, the tomatoes here aren't bad either. Fresh from the farm stand they are a sweet and yielding fruit, juicy and yearning for sea salt. Good with just a hint of fresh basil.

The point is, this is a family that cares deeply about tomatoes. I am not going to say that Indiana tomatoes are better, or New York State tomatoes. In fact, I am pretty sure that when I finally return to my garden, there will be some lovely Virginia tomatoes that have ripened in my absence. I am not that discerning -- though I guess I am picky enough, because when tomatoes are not in season, I will not eat them at all. (Though I do cook with them out of a can, I am very picky about that also.)

At the top of the season, I just cut a tomato and salt it. I do this every night and sometimes for lunch. My mother does things with them: delicious things that make us smack our lips when we are walking through the kitchen. Things that make my stepdaughter jump up and down when she finds they are for dinner.  This for instance, from the cookbook Lost Recipes, by Marion Cunningham, who revised the Fannie Farmer cookbook and works with James Beard. Lost Recipes is an ode to cooking, a lament to a generation of cooks lost because they have not the time or the inclination to cook. Lost because immigrants wanted to blend in, to taste the commercial foods of their new land, to buy foods at the market that said they were part of this society.

I think my generation does a little of both, making the food we eat uniquely ours. We've hopped over boundaries and embraced many technologies and products which allow us to stick to our food philosophies without spending so much time in the kitchen.

That said, this is an easy recipe you will never get anywhere but in the kitchen. Even if you had a market that would make this, it is the just out of the oven melding of the tomatoes, butter and breadcrumbs that is irresistible. It is very forgiving and no time will be the same -- depending on the tomatoes -- it may be soupy or thick.

Just like real life. You'll find it all good. 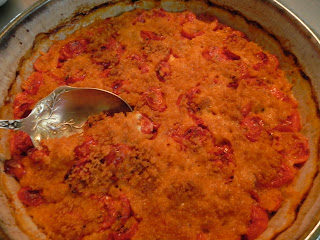 Preheat oven to 375 degrees.
Layer the tomatoes in a 11" casserole or oval baking dish. Salt and pepper after each layer.
Melt butter in a skillet and mix in breadcrumbs. (Ms, Cunningham recommends adding 2 t of chopped thyme at this stage. I am sure this would be fabulous; we like the simple flavor of the tomatoes. Your choice.) Spread evenly over tomatoes. Season with salt and pepper. Bake for an hour, or until nicely browned.