Saturday night I was at a rocking party, thrown by friends of the Middleburg Polo Academy. It was a night in Casablanca, replete with tented outdoor banquets, henna tatoos and tarot readers. We met the polo ponies, sipped champagne, and ate lamb merguez. The men wore tuxedos and dinner jackets, the women gowns and heels, and we lounged on banquets tented in silks.

Everyone looked gorgeous, dancing under the stars until way too late. We are in general, perhaps, a healthy bunch out here, living outdoors, many working with animals or land daily. One neighbor in particular, though, just radiates health -- her name is Holli Thompson, a nutritionista working hard to get the news out about a healthy lifestyle. And it's clear she practices what she preaches: It's hard not to come away from an encounter with her wanting to emulate her glow, and her lovely calm.


So yesterday, a bit drained from lack of sleep and champagne, and inspired by the fresh spring onions at the Farmer's Market, I made her Pineapple-Cucumber Gazpacho for a pick-me-up. My husband loved it. The zest of the pineapple combined with the smoothness of the cucumber, crunch of ground almonds and zip of cilantro is perfect, on its own or as a precursor to curry, which is how we approached it. It is loaded with vitamin C, healthy fat and antioxidants; the addition of the almonds makes it not only yummy but cholesterol-lowering. Cucumbers are a great way to add fiber, as they come packaged with the water extra fiber intake requires. Try to buy organic, or at least the baby ones without wax on them, as the skin contains nutrients best consumed without any chemicals that might be trapped in the wax.
Cucumbers are an ancient food, going back some 3,000 years in Western Asia. The Roman Emperor Tiberius was said to have cucumbers on his table every day no matter the season. Roman gardeners invented greenhouse methods to grow them year round, such as a raised bed in a frame on wheels that moved to optimize the sun. Can you imagine being the one guy solely responsibility for making sure the Emperor's cucumbers were in full sun? Time to move the cucumbers... 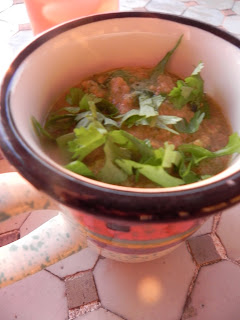 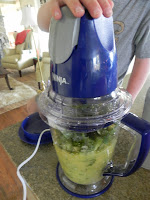