We have so many deer here that it is possible to sit on your back stoop with a gun and a coffee and shoot five before breakfast. Well, not possible for us as we do not hunt, but as you might imagine it is quite easy to score  fresh venison. I have two friends who have volunteered to drop off carcasses on the front stoop, and another who brings it already ground, in small plastic rolls, for ready consumption. You can guess whose game I take.

So when I got two nice fat rolls of ground venison last month, I started imagining. Venison chili -- done that. Venison burgers -- a little dry. Venison pie -- ah, now we're going somewhere. I googled venison pie, and came up with all kinds of recipes, none of which inspired me. Venison is so lean, it can be dry and crumbly, so a marinade is crucial, says a friend of mine (girl friend of the hunter, so she's got experience). But I didn't want a tomato and red wine- based pie, as most are, but rather a lighter, herbier base, so experimented with white wine and olive oil, with lighter herbs instead. 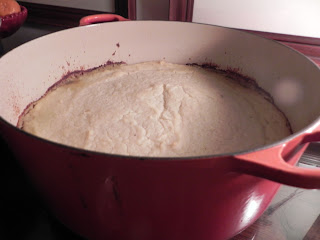 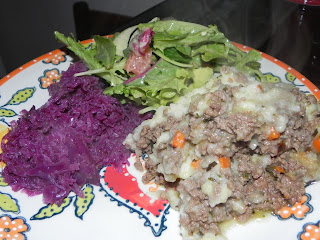 This is a mammoth pie, best for a crowd but oh. so. good. left over as well. Make it a day ahead, it gets better with age, and it's beautiful to pull something out of the oven for company instead of chefing at the last minute. I think you'll like it.

Marinade the meat a day ahead. If you've got frozen meat, put it in the refrigerator a day early and let thaw. Put the meat in the marinade and run through a cycle in the marinator or knead vigorously to make sure marinade and meat meld. Let sit in marinade 24 hours.

Make the meat pie. Melt the butter and then saute shallots until soft, about 2 minutes. Add carrots, fennel and celery, sprinkle with sea salt and let cook over medium heat, until soft. The vegetables will soften and shrink, becoming golden. Stir in the tarragon and cornstarch. Add the ground meat and stir to combine. Let the meat cook, stirring occasionally to incorporate all ingredients, until the meat is brown and cooked through.

Make the topping. Dice the vegetables roughly, cover with boiling water and boil until soft. Strain the vegetables. Heat the milk with butter lightly until butter is melted, do not boil milk. Put the vegetables in a food processor and puree with the hot milk mixture, salt to taste and a pinch of grated nutmeg. This might take several batches, depending on your equipment.

Assemble the pie. In the bottom of a large oven-going casserole or Dutch oven, spread the meat mixture. Top with the vegetable puree.

The pie may now be refrigerated until just before baking. Allow to come to room temperature by taking out a few hours before hand. Preheat oven to 375 degrees. Bake one hour.


I made a peach mint gravy to accompany it in case it was dry -- which was not the case. But it was in the tradition of a minty gravy, which was lovely, and my friend brought a lovely red cabbage which I will try to blog in no time. Try a light salad with citrus and pomegranate, as well.

Warm boullion base in the chicken stock in a medium saucepan. Puree the peaches and the mint and stir into the broth. Bring to a simmer and let condense for 10 minutes. Salt and pepper to taste.