*Disclaimer: This recipe makes grown women smack their lips and run their fingers around the lip of the jar for the last slurp. Kids can down an enitre jar before breakfast.

After dissing the national brands' cherry yogurt, I felt I had to offer a palatable alternative. I had some frozen cherries from our spring harvest in the freezer and raw milk from the cow down the road. Pie cherries are tough without adding sugar -- they're tart right from the tree, yet ours are rather a hybrid. They have a pleasant tartness to them, without being downright sour. As for the milk, the dairyman breeds both Jersey (for their exemplary sweet cream) and Holstein (who are high producers) and mixes the milk to a quite satisfactory end. Add a little local honey, and I was in business. 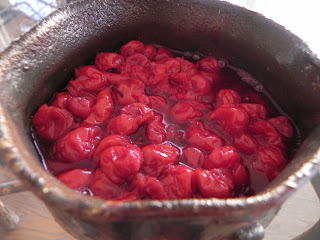 Let's be clear, I have no idea the sugar and fat content of this yogurt -- those Jersey's blow the fat content out of the park -- I can attest, however, that there is little added sugar. I added Erythritol, a sugar naturally occurring in plants, that has no calories and no bitter aftertaste, to the cherries while cooking, and just two tablespoons of honey to the milk to sweeten the plain yogurt base. I cannot, however, claim it is organic, because I just don't know. With the exception of the plain yogurt, I can however tell you that the ingredients are from a 5-mile radius.  Next time, when I have some of my yogurt to add as culture, it will be truly local.

You can make this, though, with frozen store-bought cherries and organic milk. Or any fruit you like. You don't even need organic milk. The point is, this is great tasting yogurt with VERY LITTLE added sugar. Two tablespoons, for 48 ounces of yogurt, or 1.5 grams per six ounces of yogurt. That is ten times less added sugar than the store-bought brands.

You also do not need a yogurt maker for this recipe, there are plenty of websites online with oven methods. I happen to like mine, a EuroCusine model which I paid roughly $20 for. The yogurt comes out thick and creamy, like the new Greek style yogurts we are happily seeing in stores. If you choose to use a yogurt maker, follow the instructions for plain yogurt; my quantities are based on the jars that come with the EuroCusine model. I find full fat milk works best; if you use less fatted varieties, lengthen the cooking time according to the manual. 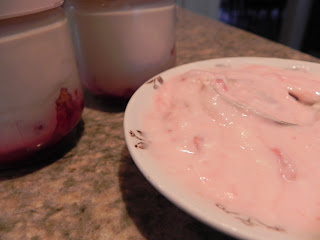 Cook the cherries and sweetener over medium heat until the cherries have softened and a thick syrup forms, about 10 minutes.

Heat the milk in a large, non-reactive pot over medium heat until the milk begins to boil. When it begins to swell up the walls of the pan, off the heat and add the honey and the yogurt, whisking fully to incorporate. Cool in an ice bath or just on the counter until the mixture is 130 degrees.

Put a tablespoon or two of cherries in each jar. Pour milk mixture over and set yogurt maker to 10 hours. In the morning, you will have yogurt. You will also have cherry sauce left over for your pancakes and ice cream. 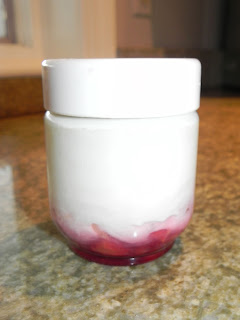