It all started because one of the boys in my son's class can't eat eggs. I don't know what happens to him, but as one who avoids a major food group, I knew it couldn't be fun to be vigilant at every unsuspecting snack time.

I first tried substituting apple sauce for the eggs, but the cake was more a muffin, though delicious with cream cheese icing.

Then I remembered the humble rice krispy treat. So versatile!

I bought several boxes of cereal (one large box makes two batches), along with bags of marshmallows, and prepared to bake. Then the snow came, postponing the party and bringing some opportune friends instead for a little impromptu celebration. I cracked open the boxes and made some monster treats. 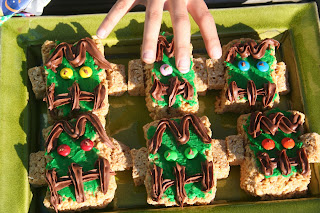 The next weekend, when the sun shone, the party was on. Starting Friday, I made 7 more batches of rice krispy treats, and left them to harden slightly in the pan. We cut them into bricks and assembled, using marshmallow fluff as the mortar, marshmallows for the turrets, fruit leather cut into flags for the decor. Small knights fought on the ramparts. Swedish fish swam in a blue icing moat, around gumdrop stepping stones.

When the time came for cake, the kids crowded around as I broke bits off and put them on plates. It was gone in a jiffy, and not one kid had to worry whether they could eat it. Seconds were had, even thirds, by big and small alike. 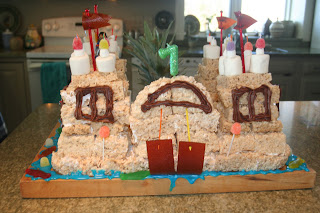 Melt butter in a pan on the stove and add the marshmallows, stirring until they are all melted. Pour over rice crispies in a large bowl and add vanilla. Stir to combine.

Pat out in lasagna pans and let harden. Cut with knife.

For the monsters, make one batch. Decorate with icing and M&Ms.

For the cake, make 7 or 8 batches. Decorate with icing, marshmallows, gumdrpos and fruit leathers.