We've been through it all in Northern Virginia this year -- 36-foot snow drifts, hail the size of strawberries, 45 mile an hour wind -- that I would not be at all surprised if we went up in a tornado straight to the Emerald City itself. In fact, up until last week, Oz might have been preferable to the saw-humming, hammer-banging hoosegow I formerly called home.

But now it is done -- aside from a little landscaping and outdoor painting, we are generally back in working order. No excuse not to cook, except weather more fickle than Jude Law. One day fine, a throw-a-chicken-on-the-barby kind of night, where we go from day to night in our swimsuits and pull asparagus from the garden, to a night fit for nothing but a fire and a stew.

Appetites, however, are confused by this 40-degree swing. Our palates crave something light, a duet of spring vegetables and herbs, but our bodies need sustenance against cold that seems even more abrasive with bathing suits still drying in the mud room. It's like coming home from the tropics after Spring Break; we'd much rather still be noshing pineapple.

As I have gotten older I have become the kind of person that checks the gas pump in the rear view mirror before I pull out, because I did forget to replace the hose once. I make mistakes, but try not to repeat them too often, at least the ones that matter, like leaving the kettle to burn black (sorry, mom) or getting caught in the latest local speed trap ($400 -- yikes -- that is a lot of landscaping!). If I miss your birthday I will send a note anyway.

So being flummoxed by weather is barely tolerable.

And yet, as a friend put it yesterday, it's as if we are all Rip Van Winkle this week.  We went to bed Sunday with the lilacs blooming and woke up to sweater weather.  Did we skip summer? I think I am not alone in stating: I certainly hope not. But back to dinner. What to feed my family in this wishy-washy weather?

Fish. Not a revolutionary answer, but an answer nonetheless. Many people eat fish on Friday, the origin of which I am unclear but will Google as soon as I finish here. But I think it the perfect answer for a Monday, when your tummies are a little hungover from the weekend's excess, in need of fare light enough to honor that and yet sturdy enough to amp up for the week's routine. I went to the local fish counter and there were no less than eight wild-caught options -- pretty good for this little hamlet. My son, who loves to operate the self-scanner at the grocery, wanted them all so he could flash the bar code, and I came close to obliging. Cod, firm and flaky and moist. Wild salmon flushed dark red by a flirtatious upstream swim. And shrimp the size of a laborador's  paw, plump to bursting out of the shell.

Paired with a head of cauliflower near to languishing in my fridge, a big fat leek and a plastic clamshell of the most perfect organic Brussels sprouts I have seen since leaving Manhattan, I had the perfect gang to start a riot. 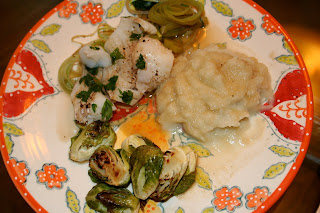 Roasted Brussels Sprouts
1 lb. Brussels sprouts
Olive oil
Sea Salt
Preheat oven to 400 degrees.
Grease or spray a cookie sheet with olive oil.
Trim Brussels sprouts: cut nub from bottom, trim any brown leaves and cut in half lengthwise.
Lay on sheet cut side down, sprinkle liberally with sea salt. Bake 10-15 minutes, or until bottoms are lightly browned.
Puree of Cauliflower
1 head cauliflower
water
sea salt and white pepper
Bring water to boil in a 2 quart pot. Trim cauliflower and cut into small pieces -- I cut the florets off and chop the stalks off into about 2 inch segments.
Boil until tender, about 15-20 minutes. When a knife sticks in easily, off the heat.
Pour cauliflower into colander, reserving cooking water.
Puree in batches in food processor, using cooking water  until desired consistency. Season with salt and pepper.
Cod Braised with Leeks
Adapted from Mark Bittman's "The Minimalist Cooks Dinner"
Makes 2 generous servings, or 3 if you are feeding a small child as well
12 ounces cod
1 large leek
1 cup chicken stock
salt and pepper
Preheat oven to 400 degrees.
Slice leek thinly and scatter over the bottom of a heavy dutch oven.
Place fish on top, pour on chicken broth and sprinkle with sea salt and pepper.
Bake for 15 minutes, or until fish is white and flakes.
Serve with puree and spoon leeks and pan juices over top.
Enjoy!
Posted by Lydia at 1:09 PM