Salmon was this year's whipping boy in the health food wars, taking the heat off caffeine, eggs and hooch.

Scientists tantalized us with findings -- the omega-3 fatty acids swimming around in fish's vibrant flesh can protect  against cancer, amp up  brain power and protect against its decline, make hair shine and skin glow, fight depression and lube aching joints. They may even, as one study of prisoners who became less aggressive when feasting on the pink fish might be spun to suggest, have a role in world peace. To reap these benefits, diners were encouraged to imbibe in fatty fish such as salmon, halibut or tuna twice weekly.

But other studies show levels of PCBs, dieldrin and toxaphene (fire-retarding chemicals and pesticides now banned but still residual in our marine environment) are higher in farmed salmon, which last year was 69 percent of market, due to their diet of  fish meal and fish oil.  Scientists concluded that eating farmed salmon more than once a month potentially increased risk of cancer along with other risks (to the neurological and immune systems). Groceries hastened to label their fish "farmed" or "wild" -- but many still do not know the fishes chain of custody, or who actually caught the fish.


Enter small fishermen and entrepreneurs like Deb Spencer, who has built a traveling fish processing plant hubbed in the tiny fishing village of Pelican, Alaska, population 80. The main drag of Pelican is a boardwalk built on a cliff above the tide line, which rises and falls up to 24 feet twice a day. 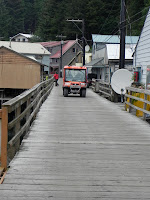 Kids wear life jackets when they leave the house for school or play; they readily show visitors how to find the tasty wild salmonberry. The town's only automated vehicles are mules. The dock that hosts their fishing fleet and the occasional visiting vessel is also the airport, from which visitors (many sport fishermen who charter from the port) and the mail fly to Juneau. 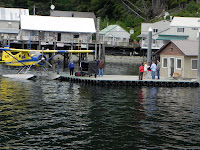 Spencer and her husband, Keith, spend the summer fishing with a small crew (all women!) in the Gulf of Alaska. They process their fish and that which they purchase from others in Pelican, cleaning and flash-freezing for shipping right on their barge.

In an e-mail from Deb, she details how to order from them:

"I don’t really have an order form – something to do… Basically we have king and coho salmon, fresh and frozen. Fresh fish come dressed (whole and gutted) with or without heads. Frozen fish are vacuum sealed and can be custom packaged from 6 to 8 oz. portions to whole fillets. My standard package is 1 to 1.5 pounds and is perfect for 2-3 people with leftovers for lunch the next day. It is most cost-effective to order a minimum of 40 pounds to get a better freight rate.

King salmon is fattier and the biggest of the 5 types of Pacific salmon; they range in color from white (marketed as Ivory) to deep red. Coho is the second largest and is a deep reddish orange; it is milder in flavor than king salmon.
Prices vary with the dock price (amount paid to fishermen). We only have king available now and they are a bit pricier than normal. Coho fishing will open in July.


Contact Deb Spencer  at crosssoundseafoods@hughes.net. We'll have a package coming to Virginia soon and will report...
Enjoy!
Posted by Lydia at 6:16 AM