Our salmon arrived from Alaska, a shipment of pink, plump, vacuum-packed fillets that put our freezer to the test. It is so over-stuffed, with cherries and peaches from our orchard, beef from our favorite butcher up north, and now the fish, that we have to lock it to make sure the door stays sealed.

To allay the problem, I decided to cook salmon for 14 to celebrate a friend's birthday. Problem was, I didn't want to be cooking at the last minute, nor did I want my husband to be at the grill during the soup course (though truth be told that is probably his preference). So the week before, when he was traveling, I cooked salmon every night, to perfect a preparation.

I roasted it, pan seared it, sauteed it, broiled it -- everything short of poaching it in oil, which Mario Batali touts. In the process, I unwittingly followed the anti-wrinkle diet highly touted by Dr. Nicholas Perricone -- by the end of the week, my skin was glowing like a bulb, no lie. I was luminous as Cate Blanchett's Galadriel in Lord of the Rings -- and in fact, used to my ruddy, puffy complexion, a trifle embarrassed by the attention it brought.

Salmon, rich in omega-3s, which provide lubrication and anti-inflammatory powers to not just your skin but heart, brain and joints, really is a power food. In addition, it possesses DMAE, or Dimethylaminoethanol, a nutrient which protects the integrity of cell membranes, deterioration of which leads to aging, and prevents the formation of arachidonic acid, which causes wrinkling. It also reportedly elevates mood -- a study of cranky teens showed those eating higher levels of fish rich in omega-3s were less hostile, important not just to beleaguered parents, but because hostility is an early indicator of heart disease.

At the end of the week, I had perfected the recipe and my complexion, and now as I learn more about omega-3s, think it was not just the party but the dish that made everyone so happy. I roasted the salmon and topped it with a cilantro-walnut sauce made with flax oil (both walnuts and flaxseed are also high in omega-3s, cilantro removes heavy metals, lowers cholesterol and helps kick stubborn viruses).

So go ahead, eat your salmon. 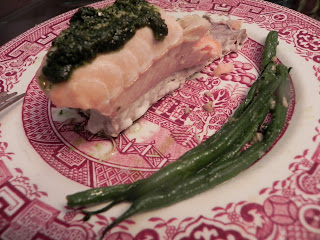 Roast the walnuts ( I do it in the toaster oven at 350 degrees for 10 minutes, or until golden brown) and whiz them in the barrel of a small food processor with the garlic clove until pulverized. Add the oil and cilantro, with the stems cut off. Process until a thick sauce forms, if you would like the sauce thinner use more oil. Salt and pepper to taste.

Serve the sauce drizzled over the fillets.

Melt butter in a large saute pan over medium heat. Add mint, cashews and a pinch of salt. Toss with beans. May be served at room temperature -- but not too appetizing cold, as butter will harden.

End of season at the Farmer's Market is sad. Gone are the Sundays of sampling fresh cantaloupe(July), peaches (August), then apples(September) from a table where you compete with bees. Gone the little last minute impulse buys that make your weekday routine a little happier, like a fresh-picked herbal tea or lemony soap. Gone the chance for a weekend morning social (maybe even accompanied by a few stragglers playing bluegrass) before heading back to the day's chores.

But for those of us who like to buy tomatoes in bulk, the future looks bright.

This past Sunday, I got a box of tomatoes that my 6-year-old could have fit in for $8. Not just the end of the crop, mind you, though there were a few rotten ones in there, especially since I waited until Wednesday night to make sauce. No, these were thick, juicy beefsteak tomatoes, smaller Romas and some rusty pink heirloom tomatoes, jumbled like one big happy family in their cardboard container, smelling like the last box of summer.

Chunk tomatoes into quarters, layer with slab chopped onion and slivered garlic on a roasting sheet.

Check every 20 minutes and stir in anything on top that is browning. Cook 1 1/2 hours total. Let cool 10 minutes. Mash with a potato masher until desired consistency -- I like it a little thicker but kids seem to not like chunks of tomato.