Going to a party? Of course you are. Turn up a notch from nachos.

Top a cucumber slice with smoked salmon and a schmear of cream whipped with horseradish and fresh pepper. 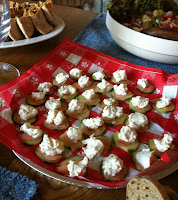 Smoked Salmon Apps
1 cucumber -- the long ones if you can, or 2 regular
1 package smoked salmon
1 cup whipped cream
2 T grated horseradish (usually in the deli section or by produce)
pepper

Cut cucumber in 1/4-inch rounds and top with shred of salmon just matching its size.

Whip cream until it forms heavy peaks. Fold in horseradish and pepper. Dollop each app with cream.

Ramen? Rather Not. College Cooking 101

I've been asked by my step-daughter and her roommates to pay particular attention to the cash-strapped, health conscious, college student -- the ones who just raided their homes for outdated colanders, cutting boards and cook pots to outfit apartment kitchens. Who would eat Ramen, but rather not. Who need recipes that are cheap, easy and good. I am assuming that although these are not vain women, food that will not necessitate buying another wardrobe or wearing a tent would be another key feature.

First we stocked her spice cabinet --- good salt, fresh pepper, cinnamon, curry, cumin and ground thyme a must -- and bought good knives and real wine glasses (don't worry, they're 21. And you can never learn too early that cheap wine tastes better out of a glass that sits in your hand in a satisfying manner.) She purchased penne and canned vodka sauce, Nutella, olive oil, Balsamic vinegar and good tea (another treat that doesn't break the bank).

And now she wants to cook. And she's ready.


Chicken Balsamic
Chicken thighs, 2 per person
balsamic vinegar
salt
garlic, peeled and sliced thin, or mushrooms if desired
spray oil
Spray a skillet large enough to fit in all your chicken thighs. Spray generously with oil, or use about a tablespoon of olive oil and swirl to coat pan.
If using garlic, sprinkle in bottom of pan with a pinch of sea salt (the thick one) and let cook for a few minutes, or until golden. Flip and add chicken thighs. Cook 5 minutes more, until chicken thigh is browned, then flip chicken.
Have the top of the pan at the ready. Sprinkle with balsamic (I use about 1/3 cup for 8 thighs for 3 people  and plenty of leftovers.) If using mushrooms, sprinkle over the top and cover fast. Steam will rise when the balsamic hits the pan and you want to capture it to steam the chicken -- this accounts for the moistness of the dish.
Cook until the chicken reaches at least 160 degrees, turning again to coat the chicken. The vinegar will form a nice thick glaze. (This will be about 5-10 more minutes, depending on how many thighs you've got in there. ( We didn't buy you a meat thermometer? Rats. Sorry. Christmas.) 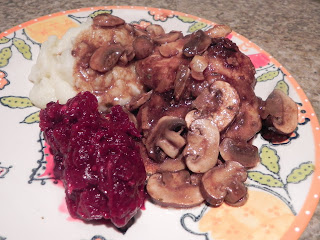 In this picture it looks pretty brown. I assure you it is food alchemy to turn thighs to prize. I love to serve it on a chilly night with cauliflower puree and cranberry sauce. Those are not included in College Cooking 101, but go for it if you want to rock Riverside.
Astound your friends. Befuddle your enemies. Above all, eat good food.
Sante.
Posted by Lydia at 7:49 PM No comments:

July has been a month of plenty. Plenty of sunshine. Plenty of swimming. Plenty of children, relatives, friends and fireworks. Plenty of berries -- first strawberries, in a season short and sweet, later black raspberries, coaxed by the heat, and now blueberries, bigger than your eye.

And, in the garden, plenty of herbs. Mint reaching to the sky, just the right height for snapping into a glass of sweet tea. Basil, bushy and fragrant in the breeze that breaks the longest heatwave these parts have seen in 15 years. Leggy cilantro, its feathery plumes heavy with coriander seed that bows its head nearly to the ground. 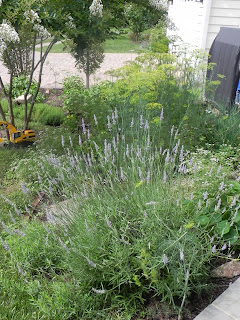 I fell in love with cilantro at an impressionable age, when it wheeled up on the table side guacamole cart at Rosa Mexicano. We lived about an hour out of Manhattan, and on special occasions my parents would dress up and take us into the city: Rosa Mexicano, with its (then to me) exotic, colorful decor, and Mamma Leone's, with its red sauce and strolling minstrels, were two of our favorites for dinner. Lunch was hands down the Automat, with its booths fashioned like old cars and cafeteria-style comfort food.

I was all of 8. The gimmicks worked like a charm. But it was the tastes, so unlike the kid-friendly fare my mother turned out  -- meatloaf, tuna noodle casserole and hot dog soup (don't ask what was in it. It was delicious) that were the real magic.

Cilantro, of course, has been around loads longer than that. I have read that Pliny named it, for a bedbug whose stench resembled that of the bitter green smell of crushed cilantro leaves. Its dried seeds are the coriander, found in the burial tombs of ancient Chinese and Egyptians to insure immortality. Hippocrates used it in his medical concoctions, and it got a reputation in the Thousand and One Arabian Nights as an aphrodisiac. Some recommend it for detox and anti-inflammatory properties.

We can prove little of this, as with most herbal remedies. But all one has to do is compare the before and after of a fish taco complemented with cilantro to make that of little consequence. Cilantro kicks a dish from humdrum to whoohooo in the time it takes to sprinkle it on.

Take, for instance, this curry chicken. Good enough for a luncheon, its sharp yogurt dressing rounded out with cumin and spiked with scallion. But add cilantro, and presto, with a fresh baguette and a cold rose, its a company meal. 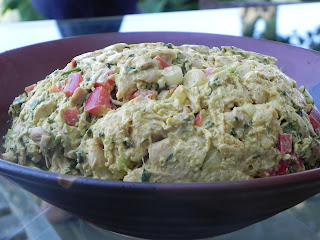 In a small bowl, mix yogurt, spices and vinegar until combined. Toss with chicken mixture and cilantro.