The favorite mornings at my mother's house are those she makes donuts. Little bits of fried dough, shaken in a bag of cinnamon sugar, seem to make everyone's day. Grandad walks by and snags the holes, not so subtly.

Doughnuts have been around since the dawn of time, and have always brought such joy. When my son learned from a friend  they served doughnuts at Hannukah, he requested to be Jewish.

Let's be clear, these are neither healthy nor gluten-free, but as they bring so much happiness there has to be room for them at the table. In reading up on donuts -- also known as doughnuts -- I found a reference to the Civil War, an incident where the Ladies Auxilliary of Augusta, Me., literally smothered their troops in donuts of every ilk. "Never before was seen such an aggregate of doughnuts since the world began," reported the Baltimore American of the "doughnation". "It was emphatically a feast of doughnuts, if not a flow of soul." 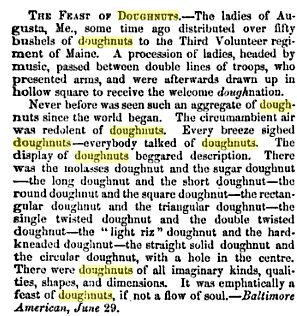 That is what it is like on doughnut morning, a flow of soul, on a river of cinnamon sugar. Try it. 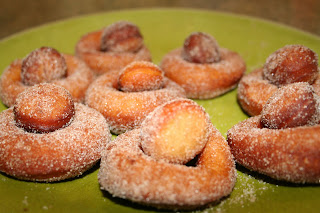 Gram's Donuts
I package Pillsbury Buttermilk Biscuits
Oil for frying, about 4 cups (I like vegetable oil, or grapeseed oil. I do not recommend canola.)
Sugar and cinnamon, for dusting

Heat oil in a deep frying pan. Take a melon baller and take the hole out of the biscuit, making a donut. Reserve holes. Fry donuts and holes in the hot oil, turning once, until golden, about 3 minutes a side when oil is hot.

Put sugar and cinnamon in a plastic bag or a bowl. Coat hot donuts with sugar and serve.