Cauliflower as big as your head

Once, while visiting my friend Sandra in Milwaukee, near the University of Wisconsin, we saw a restaurant advertising Burritos as Big as Your Head. As I was young, poor and a lover of greasy food, this seemed attractive at the time. Now I am not so sure.

Cauliflower as big as your head, though, which is what Wegmans was selling (2 for $5!) last week, is mighty appealing. Women who did not know each other stood around the cauliflower bin in their Lululemon capris, talking about what the heck to do with such a big vegetable. (What I wondered was how in criminey it got that big, but that is something perhaps we cannot ever know.) Pushing fears of steroid use aside, I heaved a couple into my cart. 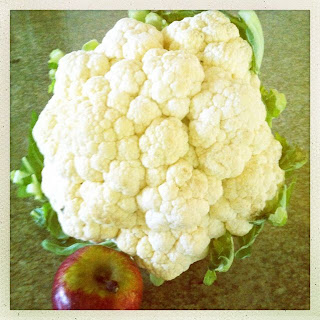 As I was trying a new Tandoori chicken that night, I decided to use the tandoori sauce and roast the cauliflower as well. (Plus, there was no space for it in my little fridge.)

With chart-topping levels of Vitamin C, Vitamin K, cancer-preventing antioxidants and phytonutrients, cauliflower is a vegetable that is welcome to the table anytime. This one was so beautiful I could not bear to cut it up, so I marinated it in the rub standing upright in a colander, then transferred that to the oven on a cookie sheet and roasted it whole. 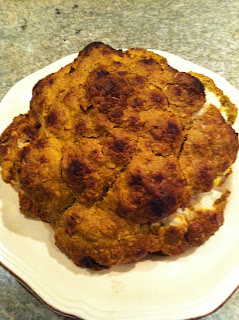 Mix in a bowl and rub over whole cauliflower, as well as 6 chicken thighs, front and back. Marinate in refrigerator for at least one and up to 6 hours.

When you are ready to cook, preheat oven to 400 degrees.

Pull chicken and cauliflower out of refrigerator. Arrange chicken on a wire rack over a baking sheet and leave out. Roast cauliflower at 400 degrees for 40 minutes, or until you can easily insert a knife into the stem section -- this is a good judge of how tender it is.

Let the cauliflower rest on top of the stove and increase heat to 500 degrees. Cook chicken 10 minutes, or until internal temp reaches 170 degrees.

Serve with rice and garnish with cilantro and raita. Oh, sorry. 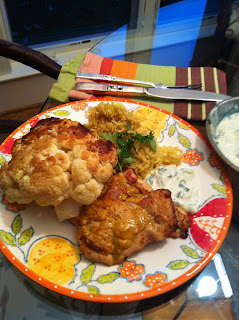 1 cucumber, grated
1 cup plain yogurt
1 teaspoon coarse salt
1 Tablespoon light-colored vinegar (I like coconut vinegar but was out, so used white wine vinegar) or juice of one lemon or lime

Grate cucumber into a bowl and toss with the rest of the ingredients. Keep refrigerated until ready to use. Can make up to 2 days ahead but will have to stir as cucumber is very liquidy.

Get Figgy with it

I am not the most patient of people. Pretty much anyone who knows me will tell you this, and the authority on the subject would be my mother.

But sometimes, one has no choice. No choice but to slow down and take time, trust the process, hope for the best -- such as with children, small puppies and, it turns out, trees.

Four years ago, I decided I wanted figs. Actually, long before that, but it was just four years ago that I was in any position to do something other than hope a carton of ripe figs would magically show up in the produce aisle, or the farm market.

My amour of figs began long ago, when I was working in New York City during college. I didn't have much available cash, but I had a place to live (a room which was mostly a bed with a path to the closet and the bathroom alongside it.) It wasn't a great place to hang out, but I worked most of the time, and the rest of the time I took to the streets. Saturdays I picked a vertical street and walked the length of it. During the week I walked to work. All of these walks included a cup of coffee and produce carts, with inexpensive seasonal fruit which I would buy to eat while I strolled.

In the fall, there were figs. I would buy a carton of the purple, bursting fruit for about a buck fifty, and one by one bite into the fleshy pink centers until I by the end of the day had devoured the entire box.

Then I moved to a place where figs were hard to come by -- and by that I mean impossible -- but I still, when visiting New York would devour whole boxes of figs, keeping them in their paper bags to hoard them away from my companions. "You can get your own," I would say, trying to be polite. I had an unreasonable affinity to this practice of eating figs in the autumn while walking down New York streets. At the time, I didn't even know how good figs are for you: one fig has only 37 calories, but is high in fiber, which helps in everything from losing weight to preventing breast cancer, as well as potassium (helps control blood pressure) and calcium (increased bone density).

One day I read a story in the paper by a woman from Brooklyn, who moved into a brownstone with an old fig tree in the yard behind. Each fall, she had so much ripe fruit that she didn't know what to do with it. I read the whole article. (Already this was good, often I am too impatient to follow an article all the way to the end.)

This sounded to me the best kind of problem one could ever have. So four years ago, when we moved to a farm in Virginia, I ordered two fig trees, one Brown Turkey fig and one Kadota fig, to plant. I didn't even know the difference. It didn't matter: they didn't take. I started reading about them, and the second year moved them to spots I thought would be much more suitable. Sunny spots, protected from wind and weather, where they could stretch their limbs to the sky and provide me with loads of juicy figs.

Still nothing. They didn't die, but they didn't do much of anything. They stayed small and straggly, shrugging off one or two figs a year, which mostly the birds got. (I know this because they taunted me by dotting the ground nearby with blotches of purple poo.) But I didn't have the heart to move them, something akin to giving up (besides impatience, I am also blessed with stubbornness). Then this summer, I returned after a long vacation to a summer which had been long, hot and dry to a landscape overgrown with weeds, bushes grown unruly and wild.  I parked my car next to a big bush that most certainly had not been there when I left. I took a closer look. It was my Kadota fig tree, nearly tripled in size, and laden with green fruits the size of ping pong balls.

Ok, not laden, but enough so that I could walk round the house with the pup and a coffee, and pull off a fig. In fact, I had to do this every day or the ants would get there first. It wasn't New York, and it wasn't a whole carton, but it was so satisfying.

So this is why patience is a virtue. 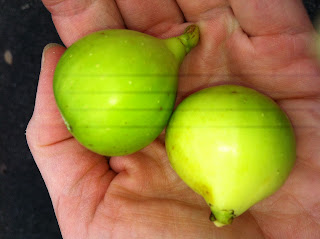 I shouldn't mislead you that I am totally cured: I have to admit that since my tree only put off about nine figs so far, this fall I have been to New York twice and both times loaded up with figs to bring home. (The good news: a carton only about two bucks fifty now!) I found them at the Whole Foods ($3.99), and the Dupont Circle farmer's market in DC ($6 apiece, but right from the farmer). And to prolong this oh so good feeling (and because I finally just got more than I could eat) I started making jam. So in the middle of winter, on the shortest, darkest day when you begin to doubt the sun will ever warm the fig tree again, I can make a fig jam and almond butter sandwich (if you haven't tried this, I highly recommend it -- I use Corn Thins or spelt bread from Le Pain Quotidien) and get the feeling.

Fig Jam
Figs are so sweet that I used only a pinch of Stevia to sweeten -- if you require a sweeter condiment, use sugar in a ratio of 3x the Stevia.

Figs, any kind, 2 pint cartons
Sure-Jell, or any pectin, 1 box (to buy this you have to decide what sugar you will use as you need to look at the packet to make sure you are buying the right pectin for your sweetner. I used the low sugar SureJell.)
1/3 cup Stevia (or 1 cup sugar, honey or agave)
1/4 cup water
Juice of a large lemon
1 t cinnamon (optional) or 1 Tablespoon lemon zest (optional) or 1 Tablespoon minced fresh thyme
1 dozen small quilted canning jars

Wash and quarter the figs, paring off any remaining hard stems. Put them in a medium saucepan with the Sure-Jell, sweetner, lemon juice and water. Bring to a boil. When it boils, add the spice or zest or herb, if you like, and bring to a boil. (I made a batch of each.) Turn down the heat and let simmer about 10 minutes. Mash with a potato masher until the consistency desired (I didn't leave any large pieces of fruit.) 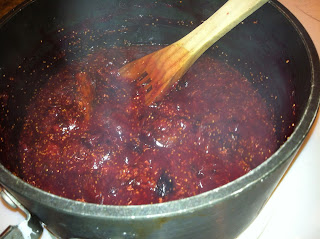 While the jam is reducing at the simmer, bring a large pot of water to boil on the stove. Put the jars and the lids in separately for 3 minutes, take out with large tongs and set on clean dish towel. After the jars and lids are sterilized, do not touch the inside of the lids or the tops of the jars, because you will have germs on your hands which could desanitize the contents.

While jam is still hot, spoon contents into canning jars, taking care to leave an inch of room on top of each for breathing space. Tighten with a rubber lid grip and put in boiling water for 20 minutes. You may have to do this in batches. Let cool, label and store. 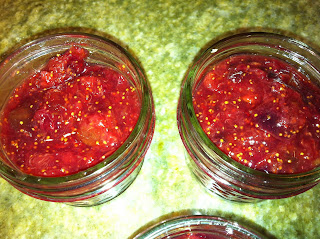 Until winter, if you can wait that long.