My husband and I have a Christmas tradition that started when we lived in DC, bC. We walk down Pennsylvania Avenue from the White House Christmas tree to the Capital Christmas tree, to compare the First Lady's decorations to the wife of the Speaker of the House's finery. Then we scamper joyously into Bistro Bis, the restaurant at the Hotel George, for drinks and dinner. It is usually quite cold and dark by the time we hit the lounge, and our feet are muddy (we do have an annoying habit of jumping the rope and getting up close and personal with the Capital tree to evaluate the ornaments, which some years look as if they were crafted by kindergarteners from all 50 states, or by hillbillies). We snuggle into a booth and order rum cosmos and frisee salad, not necessarily in that order. What follows next varies, depending on the offerings that evening, but the cosmos and the frisee are non-negotiable.

photo: Kevin Ambrose, Washington Post
A good frisee salad is hard to come by in this town. The key is the lardons, which most Americans shudder even to pronounce, so inaugurated in anti-fat are we. But the lardon is like the prize at the bottom of the Cracker Jack box - infinitely worth waiting for. The perfect lardon is hard on the outside, with a definite crunch through to a meaty center, little bacon dice which nudge the salad into song, generally Allons Enfants de la Patrie. Tangy warm shallot vinaigrette, which gets an ooze of creamy yolk after you poke the poached egg, coat the crisp, curly frisee fronds.

This year, we did not get to do this. The first edition of "Snowmageddon," occurred the day of our appointed Christmas pilgrimage, and we did not venture in from Virginia in the 18" of snow that ensued. Which kind of makes us look lame, considering that as I write this, with 36" of snow out of doors, 18" is chicken scratch.

But a week later, Christmas food shopping at Wegman's, a couple of heads of crisp frisee caught my eye. I grew frisee in my garden last year, just because it is so hard to meet, but now here it was, in the middle of winter, left high and dry by the crowds of people in panic mode, shopping as if they might be stuck in their homes until Labor Day. It was not local, nor organic, although since it was in the same row as the organic produce, I reasoned it was at least not too far away.

I brought it home with me, coddled it and hit up my freezer.

Lardon, according to Larousse Gastronomique, are strips cut from the belly fat of pork, diced abou 1/2 inch thick and used to flavor savory dishes. We have, in our town, a wonderful institution called Farmer Girls Online, which offers year round access to local purveyors, among them several incredible meat producers. I had several packages of belly bacon, and opened one from Ole Pioneers Kitchen.

Grace Brock runs Ole Pioneers Kitchen from her home in Vienna, where she uses her grandfather's recipes to make sausages and bacon. All her meat is locally sourced, which gives her the freedom to only buy the best cuts, which she defats by hand before making the final product. "I haven't had the test done, but from what I take off the meat I would say my meat is 88-90 percent fat free," says Grace, who started the business when she retired as a software analyst for Homeland Security.

"I wanted to stay home and organize my closets, but I got bored," laughs the Argentinian. "My grandfather had a butcher shop in Buenos Aires, so I had all his recipes." She uses traditional 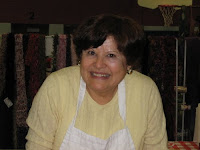 dry curing of choice cuts to make her bacon flavorful, not additives, and the products have just enough fat to brown up beautifully.

Grace's low in fat bacon proved perfect for these lardons, as the vinaigrette is best with olive oil to finish. Let them eat Lardons!
photo: Farmer Girls Online

Cook bacon over low heat until brown. Remove from pan with slotted spoon and reserve about 1 t fat. Add shallots to oil and brown slowly. Add vinegar, cover, let steam. In the meantime, wash frisee, trim bottom and set in two dishes, whole. Boil water in another pan and turn to a simmer, add a touch of vinegar (this keeps eggs from getting wispy in the boiling water). Poach eggs until desired consistency -- I like them runny, as we have established, so about 3 minutes. Garnish frisee with egg, pinch of sea salt, and diced bacon. Finish dressing with a splash of fresh olive oil and drizzle over salad. 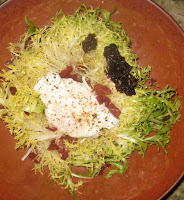 Voila. Wait. What is that, in the background (Allons Enfants de la Patrie ..)???