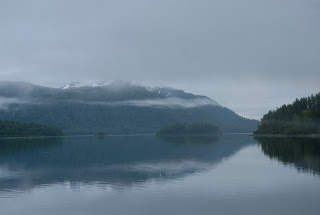 After a night in Shag Cove, we (or, rather, the Captain and my husband, while the rest of us dozed to the white noise of the engine) pulled anchor early and used the tide that previously postponed our entry into Glacier Bay to coast out, doubling our speed with the current's push. 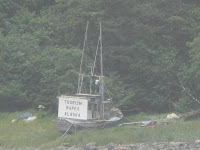 We reached Inian Cove, where the natives had put up a welcome sign. and my husband immediately set about catching supper. But after about an hour, our resident 5-year-old called it as it was, chanting "No fish, no crabs, no luck." 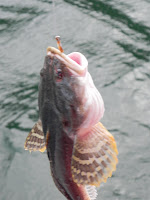 The day was gray, and the fishing was unimpressive. My husband's determination did attract one odd creature, which we suspect was a rosy-lipped sculpin. He earned his freedom immediately.

The snacks, however, were to die for. I found this recipe in an old Sunset magazine recipe booklet, which was brought aboard for its sheer minuteness. With a small tweak, these macaroons were ready for prime time. That is to say, the otters were interested. 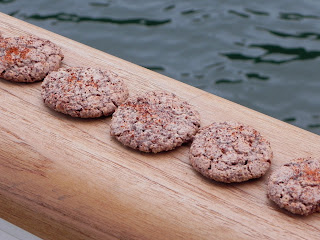 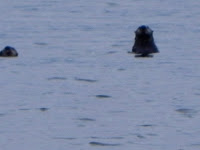 Grind chocolate and set aside. Grind almonds, sugar, cinnamon and salt in food processor. Add egg, egg white and almond extract, process then stir in cinnamon. Moisten hands and roll into 1 inch balls, place on buttered cookie sheets and flatten with the back of a spatula. Sprinkle with chili powder.

Bake until the tops are puffy and the centers are chewy, about 12 minutes.