A few years ago, my husband ordered a new grill. He researched the purchase for months before deciding on the B.A.G. (Big Ass Grill, a technical term coined by his buddy Dan). With this huge appliance came another box, decidedly small compared with the BAG, but large none the less.

Now, I am one who likes small appliances, or at least those that multi-task, and machine in the box did only one thing, marinate -- a task for which I had previously used a plastic bag and gravity. And it was a large machine at that. The following weekend was Father's Day, and when my father came to visit he promptly was presented with the large marinator.

The Reveo Marivac Food Tumbler, as it is called, is rather like a vacuum-sealed rock polisher. Meat and marinade are placed in a large plastic cylinder, and a reverse vacuum sucks out the air. It is then  placed on a rolling carriage and tumbled until the marinade becomes one with the meat.

The good people at Reveo obviously subscribe to the theory: If you only do one thing, do it well.

With the gift of the Reveo, my mother has become the queen of marinating. If there's a last minute supper, for maybe 10, she pulls out the marinator and heads out to the herb garden. On this day, a pork tenderloin; the Amish farmers also had a fresh picked romaine, and Wegman's a tub of new figs. And she, obviously, had been listening to Simon and Garfunkel.

The pork, grilled on a hot BAG, becomes juicy on the inside, and crispy out. The marinate, not confined to the outside of the meat, subtly infiltrates the entirety, making it fresh and rich and buttery soft from the soft pummeling of the machine. 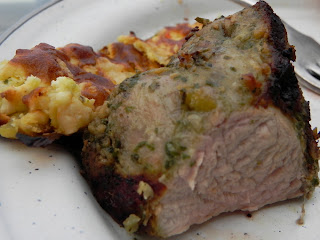 Chop herbs and garlic in food process, add oil and wine. Pour marinade into marinator (or use a plastic bag!) and marinate for 20 minutes if using machine. If using a bag, massage marinade into meat through the bag and put in fridge as long as you like, from overnight to 2 hours. Bring meat to room temperature and grill on a hot grill, to 160 degrees. 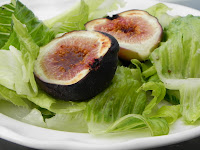 Half the figs and place on a cookie sheet. Place under a heated broiler and roast until soft, about 5 - 7 minutes.

Using your hands, tear lettuce into small (2") bits and place on separate plates. Top with shaved parmesean and drizzle with balsamic and olive oil. Put the figs on each salad.

Needless to say, I am now wanting my own marinator. As large as it is, when you do one thing as well as this does, you earn your place in the kitchen.