A friend of mine recently lent me Jaime Oliver's "Jaime's Dinners," and I am pretty sure I could have dinner with him every night. His sensibility is much like mine, in that healthy, fresh ingredients are the centerpiece, but as to what you do with them: anything goes. He follows a heady spinach cannelloni with an exotic laska, or coconut milk stew. He creates dinners in five minutes, for those who just have a jiff, or luxuriates in the hours it takes to braise tender chicken. He campaigns for healthy, delicious school lunches. 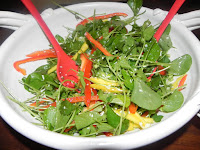 And he treats vegetables like individual primadonnas, accentuating their positives, masking their negatives and extolling their originality and overall worthiness. Take for instance, a dish he calls Keralan salad, though he acknowledges monkeying with it so considerably one might never actually find in in Kerala (which is in India). I further monkeyed with it considerably (I swear I bought the coconut, but couldn't for the life of me get it to shred properly, so ended up tossing on some frozen, and much less than he), though I hope he would still like it. I know we did. 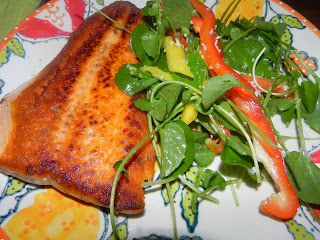 Cut the pepper into quarters, seed and slice thinly. Slice the mango into like thin slices. arrange on cress and top with coconut and cilantro.

Chop the ginger and zest in a small mini-chopper, add rest of the ingredients and whiz to creamy.

Heat a half inch of sesame oil in a non-reactive skillet and sprinkle in a pinch of salt. When salt sputters, put the salmon in the pan, skin side down. Saute for two minutes, flip and remove skin. When salmon is desired doneness (about 7 minutes for pink), remove from pan.

Toss salad with dressing. Put a salmon filet on each plate and top with salad.