When I turned 30, my boyfriend bought me a palm sander. Friends of ours told him that was not romantic enough, so he bought me something lacy and black as well.

He needn't have bothered. I have no aversion to practical gifts. (To any gifts at all, just an aside.) And in fact, while I no longer have that boyfriend or said lacy garment, all these years later, I still have that palm sander. And believe me, I cannot fathom life without it.

Sometimes, you don't know what you're missing until it knocks on your door.

There will be people who, upon reading this, will feel the need, however subconscious, to say I told you so. Their urge is well-founded. Last summer, when our whole neighborhood went on a Vitamix spree, I turned up my nose. I wasn't here, and it was easy from afar to tar emails of their ravings over a -- dare I now say it - a blender, as the musings of lunatics. It was so expensive, and how could it possibly be that much better? What could it do that my Ninja couldn't?

My Ninja gave up the ghost soon after, but still I resisted. We had two other blenders, for some reason, and I darn well wasn't going to add to the general clutter of my pantry or the earth by purchasing another single function appliance. Especially not for $500.

Then, for Mother's Day, I received a Vitamix. And let me tell you, I put it right up there on my list of life changers. My husband. My son. Glee. Actually maybe higher than Glee.

I needn't have  worried about it being a one-trick pony: in the week since I have had it, I have made soup, sauce, smoothies, pancakes, slushies, milkshakes -- and we were even gone half of the week. It was particularly good timing, as my son is losing his first tooth, as he will tell you often, and can't eat.


For those uninitiated, the Vitamix, well, here's what they say about themselves, which as a journalist is lazy but I would just like to get on with the recipe: "The Vitamix machine is not a blender or a juice extractor. It's so much more. The surgical stainless steel blades rotate at 240 miles per hour, pulverizing whole foods down to the cellular level. Valuable nutrients locked inside the pulp, skins and seeds of fruits and vegetables cannot be absorbed because the phytonutrients are trapped within plant cells which need to be ruptured. The Vitamix machine ruptures the cell walls of fresh, whole foods to make these phytonutrients more bio-available."
More bio-available? Can't argue with that. 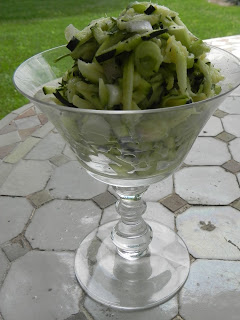 Raw Thai Ginger "Noodles"
4 medium zucchini
1/2 cup chopped cilantro
1 cup chopped mint
1/2 bunch of spring onion
For dressing:
1/2 cup coconut, rice or cider vinegar
1 teaspoon sesame oil
2 Tablespoons Tamari or soy sauce
1 knob Thai ginger, or galangal, peeled
3 stalks lemongrass, bulbs and 2 inches of stalk
3 cloves garlic, peeled
1/2 lemon
salt to taste
Galangal, or as I found it, Thai ginger, is not the same as actual ginger, though it does come in a root similarly. It has a pleasant, pine aroma and its aftertaste is far hotter than ginger, though its actual flavor is more mild. I can't imagine how I would have dealt with it without the Vitamix, but am nearly sure it would have drawn blood.
Julienne the zucchini into "noodles" and combine with chopped spring onion and herbs. Put dressing ingredients into Vitamix and pulverize. If the sauce is too thick, thin with more vinegar. Toss together.

Garnish with sesame seeds, if desired.