Our honeymoon was the most organized I have ever been. I read guidebooks, picked people's brains, even read classics set in Italy to decide where to visit. From afar, I booked hotels and restaurants.

Once there, the day's sightseeing was plotted based on where our eating was occurring. In Amalfi, we hung out at the hotel on the water all day, sightseeing in the early evening, when the heat of the day was easing and -- did you guess? -- we traveled into town or nearby villages for dinner.

We had a lot of fabulous meals, though perhaps predictably the most memorable were the unscripted. A late supper on arrival in Umbria, so steeped in truffles -- neither of us had had them in that magnitude before -- that we looked at each other wondering what that delicious aura was. For the rest of our time in the region we hunted foods containing them -- truffle oil, truffle cheese, even truffle gelato -- like junkies. The picnic we bought on the way back from Pompeii, at a little store on the side of a mountain so steep one of stayed in the car with his foot on the pedal while the other dashed in and bought fresh red tomatoes, mozzarella and wine in jars, vintage yesterday, to eat on the balcony of our cottage overlooking the Mediterranean. Our last night in Rome, when we left a mediocre restaurant after the appetizers and wandered the cobblestone streets from wine bar to wine bar, ending up at a pizzaria with the locals with my high heels kicked off under the table, so far from our intended path I could probably not find it again.

We slept in, drank wine with lunch and had coffee late in the day. We ate fried foods willy-nilly. I even ate bread and pasta, without worry or even retribution.

One lunch we stopped in the shadow of the coliseum, in an ordinary-looking restaurant, Da Giggetto, in the Jewish ghetto near the ruins of the palace built by Augustus for his sister, Ottavia. It was unassuming enough, but the carciofi alla giudia --   literally artichokes smushed by a brick and deep-fried, were like bits of heaven. The earthy artichokes, in a light batter, fried in oil so hot it didn't even get to the artichoke. Zucchini blossoms, stuffed with ricotta and garlic and fried. Squid, fresh from the sea, with a batter so light it might have been tempura. We polished off everything on our plates, licking grease from our fingers and washing it down with fruity white wine.

I've never forgotten that meal. One summer, with visions of this lunch in my head, I grew zucchini just to stuff the blossoms. But I've never attempted the artichokes, though I've been hankering for them these ten years. After all, but the one time, my husband not only will not taste them but visibly recoils in their presence. Then I saw baby artichokes in the grocery store, shopping for a small dinner with a friend who also loves artichokes.  Dare I?

I did. I didn't smush them (no clean bricks), and I didn't deep fry them (not enough oil), but I did saute them in an inch of good olive oil, and finished with pressed garlic, mint, parsley and a pinch of coarse salt.

And we ate them all up. 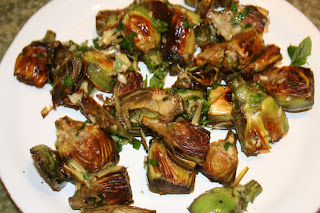 Peel off the tough outer leaves of each artichoke, until you get to the tender greenish yellow leaves inside, and cut about 1/2 inch from the top. Half the artichokes. They will brown if you do not put them in a bowl with water into which you have squeezed lemon juice, but it doesn't matter in the end -- I wasn't particular about it.

Mince herbs and garlic, set aside. Heat oil in medium skillet over medium heat and melt 1 teaspoon coarse salt. Add artichokes and saute, turning once to brown on both sides.

Remove from oil with slotted spatula to a bowl. Toss with herbs and garlic, a little lemon zest would rock too. Serve warm with drinks and olives. Would be divine with roast red peppers as well.