The Morel of the Story

It occurs to me that I didn't mention how I know my friend is addicted to the foraging for morels, as opposed to the outcome.

1. She is infinitely fair dividing them up at the end. Even if everyone keeps their own bucket, they all go in a pot and are divided at the end of the day.

2. Past scarfing that first batch, she doesn't down them. A great many are still strung on thread and hanging from her mantle to dry as I type.

3. She sings to the morels as she roams, eyes to the forest floor,  and believes they have superpowers.

I am starting to believe she is right. Nutritionists certainly do.

In clinical studies in which subjects were randomly assigned diets of  either mushrooms or beef, participants eating the mushroom meals consumed 430 calories and 30 grams of fat LESS per day. Most astonishingly, they didn't report any difference in satiety than did the beef eaters, nor did they compensate for their mushroom meals by pigging out later. Another study suggests that if the average American male substituted a 4-ounce Portobella mushroom for a 4-ounce grilled hamburger every time they ate a burger for one year, and changed nothing else, they could save more than 18,000 calories and nearly 3,000 grams of fat. That's roughly equal to 30 sticks of butter.

Magic? Perhaps. The magnificent mushroom is also the bearer of vitamin D -- scientists say a serving of mushrooms, with 20 calories and no fat, provides 100 % of our D goal after just five minutes of contact with sunlight. And they're packed with nutrients like selenium and niacin, which provide antioxidants to boost immune systems, combat cancer and break down fats and carbohydrates.

It's starting to sound as if we can't afford not to eat them. With eggs from the neighbors and spring greens and asparagus from my garden, they are as beautiful and tasty as they are healthy. 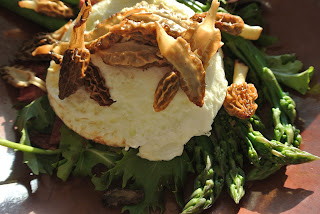 Rinse arugula and mint and shred on a plate. Bring water with a pinch of salt to a boil in a flat skillet, add asparagus (pinch off the rough ends) and cook until tender. Add a spray of coconut oil to the skillet and quickly fry two eggs. Top the greens with asparagus and egg, then flash fry morels (I cut large ones in half -- and remember, they aren't the biggest fan of water, wipe any dirt away gently with a damp towel) with a few more grains coarse salt, just until warm.