When I first met my husband we were both flying around for work. One evening we met at National Airport, having come from different planes, and he very sweetly asked what I would like to do for dinner. I was tired and wanted to stay in. I know it was a Wednesday, because I had read a recipe I thought would be fun in the New York Times food section. But before I could tell him that, he reached in his briefcase and pulled out a NYT folded to that very recipe: Beer Can Chicken. 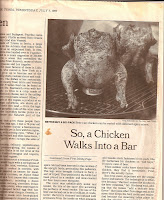 No surprise, that is what we made for dinner. It did peg my then boyfriend as a beer snob, as he only had Heineken (in glass bottles, which wouldn't at all do) in his fridge, and he actually had kind of a problem with buying Budweiser.

I married him anyway.

Nearly a dozen years later, we still make it. If you can't guess from the recipe's title, it involves a beer can and a chicken, some spices and a grill. The kids love it -- the way the chicken hunches over the can like a Wisconsin ice fisherman waiting for a bite. It makes for poultry moist on the inside, with a coating of crunchy skin floating on the outside, kissed with cumin and paprika, which falls off the bone with a delicate steam like a woman fainting.

This method is reminiscent of a rotisserie chicken, but spiking the beer with herbs really ups the intensity of the flavor. On the rotisserie, we stuff the chicken with whatever herb is running away with the garden, in this case lemon balm and parsley, and always a ton of garlic. 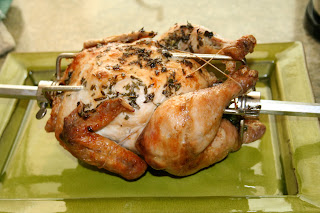 Either way, it's a winner. While it sits on the can you have time to sit and catch up on the week, or you can leave it with a magazine and go do laundry. It is truly easy and delicious. Procure an organic chicken (thank you Elaine Boland at Fields of Athenry, AGAIN!) and you've got a home run.


Beer Can Chicken
(from the NYT food section, original recipe, Wednesday, July 7, 1999. I don't know whose copy this is, mine or his, but no matter. It's all ours now:)

1 cup wood chips, soaked in beer or water to cover for one hour then drained
1 can beer
1/3 cup barbeque rub ( this can be varied depending on your tastes. I like the cumin/paprika combo, as mentioned above, but you can easily use a store bought jar. Herbs will work for a more elegant bird, and it is lovely with just sea salt as well. I kind of go by what I want for sides)
1 3-4 lb. chicken

Set the  grill up for indirect grilling. On a charcoal grill, this means lighting the charcoal, and when it is burning separate it into two piles with a foil drip pan in the middle the size of a pie plate. Position the grill above the coals and set the chicken on its pedestal on the grill. Toss the soaked chips on the charcoal to generate smoke. Cover the grill and cook for about an hour. If needed, toss more briquets on and keep the cover off until they ignite. On a gas grill, if it has two burners light one side and cook chicken on the other. If there are three burners light outer two and cook chicken in the middle. Wrap the chips in foil and poke holes on the top; put in on one of the burners. If you do use the rotisserie,  lose the can.

Open beer can and pour half on the chips. Sprinkle 1 tablespoon of the spice in the can. Sprinkle half of the rest in the cavity of the bird, and the other half rub on its exterior.

Stand beer can on counter and lower each chicken on the can so it covers the main cavity. Pull the legs forward to form a tripod so the chicken will sit up over the can. Carefully put chickens on grill, over the indirect heat.

Throw chips on coals or slip into burners as mentioned above. No matter your cook method, roast chicken until browned and meatiest point of the thigh registers 165 degrees; juices will run clear. Take off grill and discard can, carve and serve.