Onward blazing through our fridge of fish. I have to say, I rarely cook shrimp. I don't quite know why - it's easy and good and can really swing any way.

Take that back -- I kind of do know why. First off, I really don't love to peel it. The little shrimp legs get stuck under your fingernails. And then there's the procurement of the stuff. When we lived in Georgetown, bC, I used to walk down the canal to Cannon's Seafood, on 31th Street, where the shrimp tastes like it just jumped the net. All those shrimp needed was a swirl of melted butter in the skillet, toss in and cook until they turned pink. Now those were some shrimp. 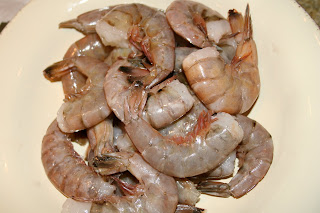 But these shrimp, even though they were and plump and moist looking, were from the grocery. (Not that there's anything wrong with that.) The sign read "wild caught" but didn't specify when. Good enough for a stir-fry, my 5-year-old declared, "Chinese!"

This is a clean out the fridge kind of dish, that can be personalized with whatever you have lying around. It's generally good to put in garlic and onion, but as I was trying to appeal to kids I left them out (I put them in the greens, which I ate with the stir fry instead of rice). You can also add those cute mini corns -- kids love them -- or bamboo shoots or water chestnuts, but I had none in the larder.

Heat large skillet or wok. Add oil, then saute ginger and garlic if desired. Add vegetables and stir, adding soy sauce to thin sauce to desired consistency. Cook about five minutes, until vegetables are tender or soft. depending on your taste. Add shrimp last, toss and cover. Steam until shrimp are pink and opaque.


Serve over rice (Basmati or Jasmine are especially nice). If you are catering to little ones (or big folks with food phobias), put whatever they won't love in a separate skillet. That way the veggie-vores (like me) can toss it all together. Heat oil in a large heavy skillet. Add slivered garlic and stir. Cook until garlic is browned, about 3 minutes. Turn down heat and add greens, cover. Greens will steam and wilt; toss with oil and garlic and serve.