Healthy is a progression, at least it was for me. I learned to be concerned about my weight in 10th grade, when a friend convinced me we needed to go on a "diet." (We lived in London, and I am fairly certain we discussed this over bags of Maltesers, milk chocolate covered malt balls which are conducive to eating by the handful.) I am not sure what our "diet" was, except that it made the sweets all the more tasty -- her mother made a pistachio pudding cake with ginger ale (really!) that still rocks my mind.

In college, "dieting" was a two-day cleanse consisting solely of very large chocolate chip cookies heisted by the stack from the dining hall. In my first years of working, I would go to the gym before work, and to happy hour after, eating free appetizers and drinking wine spritzers to save calories (and money). Clearly I was learning balance.

Of course I learned to eat salads, asking for dressing on the side. I made soups, leaving out the pasta. One of the first "healthy" cookbooks I got -- from my mother, I believe -- was Jane Brody's Good Food Book. While the high carbo style didn't do much for my body -- instead of the promised high kicks, I got what felt like a rock in the gut, diagnosed much later as gluten intolerance -- there are some of her recipes that I return to time and again. 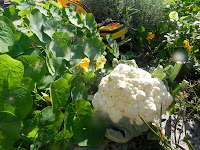 It is only in the last ten years that I have kicked up eating healthy to eating locally, and this is the step that has truly made the difference. When I found this huge cauliflower (at the Farmer's market, not in my own garden as this photo might suggest), such a far cry from the cellophane-wrapped waxy white florets usually found in the grocery, I immediately thought of Jane. She makes an easy vegetable curry that will jolt your world. Try it.

Heat 1 teaspoon of oil in a large skillet. Add the garlic and stir until translucent. Add the spices and roast one minute. 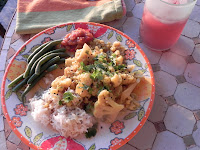 ***Spoiler alert!!!!!
Cauliflower is way healthy: high in fiber, antioxidants and vitamin K, it provides digestive support via an enzyme that provides protection to the stomach lining plus -- get this -- possesses the ability to prevent, and perhaps even reverse, blood vessel damage. By the way, the French like it too -- and have you ever met a French chef who chooses a food solely due to its health benefits? -- the chouxfleur shows up in François Pierre La Varenne's Le cuisinier françois, the original  French cooking, though it was not common until  Louis XIV introduced it to the table.

And so we are introducing it to ours. This is how we get our 5-year-old to eat healthy items: "No, don't eat that, I don't want you to grow up and be bigger than me!" (totally untrue, but totally works, by the way.) It occurs to me that might work with adults as well, so here goes ..... don't try this at home ...