We have a new toy. Once again breaking my vow of no one-trick ponies, I bought an apple peeler. We love it. It makes processing apples like playing for my 5-year-old, who loves the neat spirals that come off the apple. It peels, cores and slices in about a minute, and you don't even have to wash the apple. 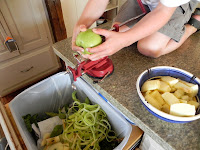 So I guess that makes it not a one trick pony.

Our apples, and again I have to admit that I do not have any idea what variety they are, have just the right sweetness for me. Pan-fried in butter with gobs of cinnamon, I can them for later use in pies and crisps, or just solo. This is so easy, I have started to do it in the slow-cooker (in about half the time as applesauce) and can in 1 quart jars, thinking I'll get a pie a jar. This recipe fills a slow cooker, which makes about 3 quarts. Which is all I can can at a time (yes, I meant that), so it works out. The apples are just cooked, soft without falling apart, crusted with cinnamon but not soupy. 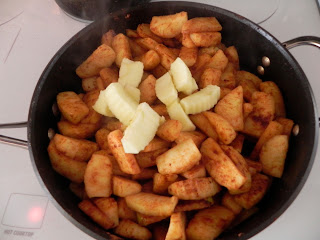 Pan-fried apples with cinnamon
basket of apples, perhaps 2 dozen, or to fit your pan or slow cooker
cinnamon
butter

Peel, core and section apples. Melt about two tablespoons of butter in a large skillet, or in the slow cooker. Pile in the apples. Sprinkle with cinnamon. Cover and let cook for about 30 minutes at low, stirring to incorporate the cinnamon and keep from sticking to the pan, but not too often; I like the sections to stay firm and together. In the slow cooker, I leave for three hours on low, stirring just once after about an hour to distribute cinnamon.

May be canned in jars the size you wish, or just consumed, in a pie or just with a spoon.