When I met my husband and his children, then 6 and 9, they a lot of pizza. He'd pick them up on Friday, swing by the local pie joint and then home.

This, as far as I know, was the only night of the week they ate pizza, so I am not condemning him.  I, however, don't like pizza as much as the next guy, and am pretty picky about what I eat. (Ok, really picky.) Not neurotically picky, but after a few months of pizza fallback, I needed a plan. I gradually augmented with a salad, then began with home-cooked kid friendly items like hamburgers, spaghetti and fish.

I needn't have been so cautious. A crusty loaf of bread didn't last more than a day -- we topped it with Vermont Sharp Cheddar for grilled cheese or marinated it in egg, milk and cinnamon for French toast. Turns out, these people love real food. They'd come home from school and sit on the counters while I cooked, jabbering away. (Our next house had a kitchen island with stools, and they still perch on the counters.) They downed sea bass like most kids do hot dogs. Breakfast at the Locke Store (a local culinary standout) got everyone out of bed.

Jessica Seinfeld hadn't yet published her theories about sneaking pureed veggies into every spoonful, but we made do. For starters, they all love peas, which I buy frozen, and carrots, which I boil until soft, drain and top with a flourish of butter and maple syrup. Broccoli was another winner, even without cheese sauce. Or green beans, fresh and steamed plain. Sauteed leek and zucchini pancakes? They ate them (I almost wrote that they loved them, but at that time our relationship might have been such that they were only being polite. Now, I would definitely get the real review.) By the time we married, they expected a full blown salad, with mixed greens, herbs, walnuts, dried cranberries, grated Parmesan and a tomato vinaigrette, with dinner.

No, vegetables weren't really a problem with the kids. But my husband wouldn't touch 'em. That's actually not fair: Let me rephrase. For most of my adult life, I have been in the camp that makes vegetables the main part of the plate, meat or seafood the side. He definitely puts the steak first, and thinks creamed spinach counts as a vegetable. So with him, it's been a slow, steady slog through the annals of produce, trying one recipe after another to increase produce possibilities.  I've succeeded in general, one by one introducing mushrooms, Brussels sprouts and eggplant. Beets, asparagus and artichoke may never happen, but even after 9 years of marriage I still, occasionally, apply pressure.

When I really feel the love, though, is when he actually cooks me a vegetarian dish. He's always one to add a salad to dinner, and sometimes even some crispy roasted Brussels sprouts. (Once he even made Spaghetti Squash with Tomato, Olive Oil and Basil from Pino Luongo's La Mia Cucina Toscana, a fabulous cookbook which he, not coincidentally, was responsible for bringing home.) But last week, when he asked what I wanted for dinner, I pushed my luck.

And then I left, for several hours. When I came home, eggplant is was. With a side of steak, but hey, progress. Thanks, honey. 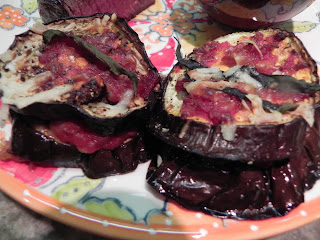 Use spray or a teaspoon of olive oil to coat a medium skillet. Saute onions and garlic over moderately-high heat for 3-4 minutes, until soft. Add tomatoes and continue to cook while stirring until most of the liquid evaporates, about 10 minutes. (If you don't have fresh basil, add a teaspoon of dried right now, and it will flavor the sauce.)

Coat a 12-inch baking dish with cooking spray. Arrange half the roast eggplant in the bottom of the baking dish. Smooth half of the tomato mixture over the eggplant and sprinkle with half the basil and Parmesan. Repeat with the rest of the eggplant, tomato and Parm.

Bake at 374 degrees for 35 minutes until golden.