Tip One: Get out your Frying Pan

This is the first in the Kitchen Reform series, meant to help make your kitchen heatlhy.

I hate coming back from vacation, even if I haven't gone anywhere. And coming back after the winter holiday seems especially cruel. After weeks where every dinner is a celebration, days of sleeping in, sledding and long walks and fires, here I am with my steaming tea mug and bone cold fingers.

At least I have a mission. Which today, week one of kitchen reform, is only intellectually onerous. What I want to do this week is think about cooking, the preparing of food, "from scratch," as it is sometimes called.  The term "scratch" initially meant the line scratched into the dirt as the start of a boxing or cricket match, but has evolved to mean start with nothing, with no advantage. But as Carl Sagan said, "if you want to make an apple pie from scratch, you first have to invent the universe."

So if you think about it, the hard part has already been done. Advantage, us.

Cooking itself has been done since man made fire, and some say cooking made man. It is responsible for social structure and community bonds, commerce, the centerpiece of celebration from family birthdays to the beginning of dynasties and empires. If we are what we eat, then cooking has made us.

But many bemoan the death of cooking. The influx of cheap fast food, prepared food, convenience food, take-away, even the previously chopped vegetables in supermarkets has slashed the need for "scratch" cooking. It's not a new concern: back in 1882 food writer Baron von Romohr charged that "not inheriting a traditional cookery based upon the sensible preparation of local products and so resorting to soul destroying books, the respectable, virtuous wife no longer knows how to prepare meals." And it's not solely an American concern, either, just last year French chef Alain Ducasse said French mothers are no longer passing their skill with a frying pan to their daughters, relegating cooking to a weekend hobby. And just last week, my brother-in-law, who has worked in the food service industry his entire career, told me he didn't have time to make breakfast.

He's not alone: as a country, we spend less than half the time in the kitchen our grandmothers did. But many equate cooking's fall with the rise of a host of individual  and social ills. The easier it is to get food, the more we eat, Harvard's Dr. David Cutler has shown. Fast food portions are 2-5 times as big as they were in the 1970s, and our propensity to snack has increased 50%, with another 19% expected over the next five years. Not surprisingly, we are twice as fat: Nearly 30 percent of Americans are obese and twice that overweight.

The reality is, fast food might take less time, but it also might give you less time -- on the planet. Health economist Randall Strum discovered that in terms of chronic conditions, being obese is akin to aging from 30 to 50. Which solves the problem of what to do with the money you might save buying cheap fast food: We're spending it curing our hearts and our diabetes, not to mention replacing our hips and knees.  The obese spend at least $10,000 extra in health care over their lives, our country billions a year.

This is not to say that all fast food innovations are necessarily bad. But it is important to know what their true cost is -- unintended consequences, if you will.

Preparing your own food gives you back control. If you don't want to be tricked into eating too much industrially engineered crap, just say no. And say it now. Cooking will allow you to choose your ingredients, and their proportions. It saves you money, and, in the long run, gives you time -- with your family, and with you. Not with fat slug on the couch you, but with healthy, energy-filled you, with great skin and clear eyes (can't promise green, though). 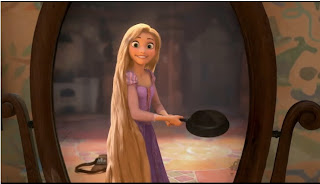 Just chew on this a while. Then get out your frying pan. It's the weapon of choice in the newest Disney flick, "Tangled," and it is yours, too.

Egg, over easy
This is a simple meal for any time, and a good a place as any to begin. Start to finish, circa five minutes. The egg is the perfect package, protein and fat and even cysteine, suspected to relieve hangover symptoms. Throw in some toast, or an apple, or even drape it over leftover spinach casserole or potato gratin, and you have a meal, pronto. Use organic, free-range eggs if you can, and if not, please cook the yolk.


Turn burner onto high under small skillet and melt about a half a teaspoon of the oil or butter, enought to swirl to coat the pan. Add a pinch of salt, to sizzle. Break an egg into pan and turn heat down to medium.


When egg white is set on the bottom (about 2-3 minutes depending on the heat; pictured below), insert a spatula under the entire thing and flip. Off the heat and let sit 1 minute for runny. Or continue cooking until your desired doneness. 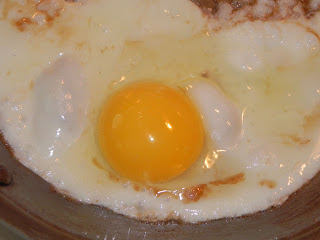