So halfway through this mini-cleanse and I have to say, it's really a breeze. Lots of water with lemon, miso and fruit when desperate; brown rice cooked with vegetable broth for body and veggies. Mounds of veggies. Steamed, for the most part, but tonight I got out a cauliflower, and it was just lovely. White as the caps of waves, and with just as much lovely texture.

Its beauty seduced me. I decided to cheat, just a little bit. After all, today I went to a luncheon and sat for two hours eating only a glass of water, two slices of steamed zucchini, and a leaf of lettuce. That is to say, all the food in three courses that was not either breaded or sauced. (Disclaimer: it was fun. Had it been a snoozer I would have been eating my own arm. Or the pound cake.)

It just reminds me how utterly hard it is to eat completely clean, unless you are at home with total control of your own menu destiny. A bit of oil for sauteeing, a pinch of sugar to mask tartness, a smidge of butter for finishing -- these add up. Mostly on our hearts, and our hips.

Anyway, when I got home I was ravenous. So I set to making a feast that would stay within my bounds -- a clean feast. I cooked brown rice (I love the Lundberg Farms short grain organic brown rice) in vegetable broth, adding water when the pot dried up before the rice was done. The result was a nutty, fat kernel that stuck close to its buddies for a dense spoonful. And for the cauliflower, well, steaming seemed a little boring. Granted, the cauliflower is a complacent vegetable. Which is not to say it can't be coaxed, dressed up into a silky swirl. But it is also happy to sit plainly on the couch. It doesn't mind a bit what people think of it -- I guess it's the years of being underrated and misunderstood. I, however, wasn't brooking boring. Not today.

I know, I know. It's supposed to be austere. I stink at this. But listen. It's not so bad as you think.

I didn't saute. I didn't even reach for the spray oil. Instead, I poached the cauliflower in vegetable broth and a wee pinch of curry. I added a handful of peeled garlic cloves, which I mashed when soft to bind the cauliflower. For salt I substituted lemon zest.

So I live to notch another day CLEAN -- though I will totally make this when not. And the whole family ate it, which means it gets bonus points. 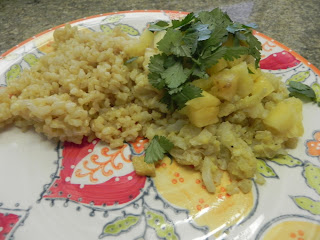 In a small stock pan, combine broth and curry; whisk to mix well. Add cauliflower and garlic. Simmer over low heat until cauliflower falls apart, about 30 minutes. Garlic will be smooth enough to smash with the back of a spoon; do so. Stir lemon zest into smashed garlic and cauliflower, which should cause it to fall to bits.

Serve over brown rice with bits of fresh pineapple, making your plate oddly yellow in its entirety. For taste as well as zip, if you like, a spoonful of plain yogurt and a sprinkle of cilantro wouldn't be amiss. Nor would a few cashews, though I can't put as much as a toe on that slippery slope.