"You have to be humble. Confident, but not cocky. You cannot expect to find them or they will not reveal themselves," says my friend Amy, as we plow up a hillside of thicket, after sliding through a muddy creek, slipping through a barbed wire fence, and climbing over fallen trees wider than we could straddle. Our pants are tucked in our socks against ticks and poison ivy, we grasp knives and paper lunch bags.

She is talking about mushrooms. We are mothers, writers, gardeners and daughters. But today, we are singing to the morels, hoping for a glimpse.

I cannot tell you where we were. We swore each other to secrecy. I can only tell you, there was a stand of poplar, and fragrant spicebush in the under story. Poison ivy, spring beauty, dead elms, may apple and fiddle heads are other clues. Oh, and an east facing slope, with a good shade canopy. Too rocky, or too much dead wood is a non-starter. As we climbed Amy sang -- "Morels, reveal your selves...."

It was a labor of love for two of us, and for me, a journalistic opportunity. But it didn't stay that way for long. As we trudged through the mud, spotting one morel, then another (they appear in twos, as if finding one makes you worthy to find another. Boy, was I drinking the Kool Aid). I began to crave sighting the small, fragile, brainlike fungus. We left reluctantly that day, hoping that the mother lode was just coming in. Plus, the mother in us was needed -- it was school pick up time.

So we went home with our mushrooms. I cooked them, with asparagus from my garden, salt and fresh butter. I was positively besotted. I don't use that word lightly.

When we were on our honeymoon, we drove from the Amalfi Coast, in Italy, to Umbria, arriving at our hotel just before midnight. (One cannot, after all, drive by the sea without climbing into it). They served us dinner in a marble courtyard lined with olive trees, and despite the fact that it was Italy, we were all alone due to the time. In the candlelight we ordered dinner, and when it came there was a predominant taste I struggled to identify.

Over the next few days I found out it was truffle. In the vegetables, on the meat, in eggs, cheese, even gelato. Everything that said tartufi, I ordered. On our last weekend, we dined at Taverna del Lupo, in Gubbio, because we had heard everything was infused with truffle. When we came back, I was desperate for it. So desperate we flew to the restaurant Sistina, in New York, near my parents apartment, because I knew they had the whole truffle to shave over my pasta.

But nothing quite measured up to those local truffles. Until these morels. 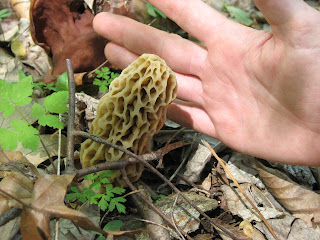 After that dinner I started thinking about the hillside. About the delicate mushrooms poking themselves through the leaf blanket. Later that night it rained, and I wondered if they enjoyed it or not. I dreamt about their earthy taste, sauteed in butter. 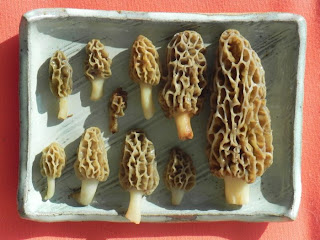 Heat butter in skillet. add salt to sizzle. toast garlic until softening and golden. Add morels and stir two minutes -- then off the heat.

Boil the asparagus until tender, about ten minutes depending on the thickness of it -- test doneness by poking with a knife -- it should give softly.

Pour morels and butter over asparagus. 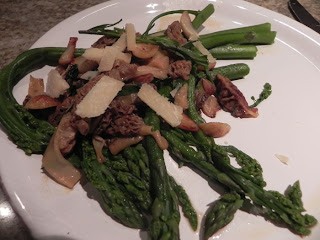