Starting babies on real food is easy. They love the color that sweet potato becomes when it splats on the floor, the gush of a green pea being smushed. But getting big kids to eat real? More of an issue.
I had a child who heartily chowed colored food - wore it proudly, as it were - until he was 4. Now he prefers white food: mac and cheese, pizza, bagel and cream cheese. I am constantly pushing his nutritional envelope, swirling peas into whole grain pasta, hand-making tomato sauce, putting strips of crunchy red pepper in his lunch.

So when I heard of a recipe that involved cauliflower and broccoli, which kids were clamoring for, I had to check it out. Ana is from Bella Vista, in Jalisco, Mexico. Her mother has a bakery there, so Ana grew up with flour on her hands and the sweet smell of Belle Vista's sugar mill in her nostrils. I have not been there but I have a vision of a light-dappled town draped in bogainvillea and  smelling faintly of caramel all the time, a sweetness that surely permeates its inhabitants if sunny Ana is any indication.

(Just as an aside, here is a scary indicator of America's sweet tooth: According to Domino, of 100 pounds of sugar cane, 88 pounds become white "extra fine" or table sugar, and 3.5 to 4 pounds become three types of brown sugar: dark, light, and a medium that is sold only commercially. Two pounds becomes liquid sugar and two pounds is powdered. One and a half pounds of blackstrap molasses, a byproduct of the refining process, are also produced. Another byproduct, bagasse, which is what is left after the cane is all pressed out of the stalks, is being converted to fuel by some savvy entrepreneurs.)

Growing up, Ana made this with the vegetables that grow plentifully and are sold at the outdoor market there; we used organic substitutes from the local market and it was still yummy, strangely sweet though there is no added sugar.  Or "jummy" as Ana says it, "jummy in my tummy." Imagine how sweet it will be when we get our own local produce. 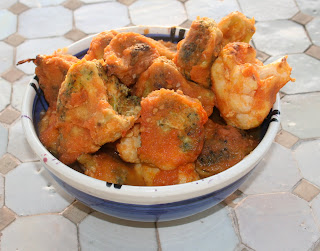 Slice onion lengthwise and saute in one teaspoon oil in a medium pan, until translucent. Meanwhile, boil a pot of water and blanch tomatoes so their skins slide off easily. Put tomatoes and garlic into blender and whiz to puree. Add to onion with pinch of oregano and let cook on low while you prepare the cauliflower and broccoli: this is the salsa.

Separate the egg. Beat whites until high and stiff. Fold in beaten yolks. Heat 2 tablespoons of oil in a saucepan. Dip florets in egg batter and fry until golden. Remove to a paper towel to cool. Repeat until all are done. 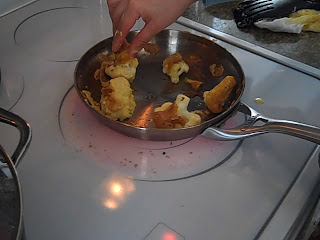 Season the salsa to taste with sea salt. Put the vegetables in the salsa and cook ten minutes; sauce will thicken and permeate the veggies.