When Elaine Boland's second youngest daughter was 6, she began gaining weight at a rate so differently than her four sisters that her mother worried. Her energy waned, she had pain in her joints and headaches; some days she "shuffled like a little old man." Doctors said it was just a matter of exercise and diet; one even suggested the girl was getting into her mom's birth control pills ("C'mon. Really?" says the Catholic mother of 5).

So Boland, a farmer, took matters into her own hands. She began growing their own food on her farm, Fields of Athenry in Purcellville, VA,  feeding her family straight from the earth. "If it doesn't rot, don't eat it," became their mantra.

"We've gotten so far removed from our food sources that we don't even recognize our food," says Boland, a tall, very present woman with a sweep of red gold hair and cowboy boots. "If we would take yesteryear's food in combination with today's medicine, much of the whole health care drama would go away. We could fix adult diabetes, a good deal of depression, sleeping patterns -- and doctors could focus on real illness."

Seven years and brain surgery later, doctors finally diagnosed Cushing's disease, an imbalance of the thyroid that creates unstable cortisol levels, which control energy. But in the meantime Boland has created a utopia of fresh, local goods which she now hopes can help others to find their way back to real food. 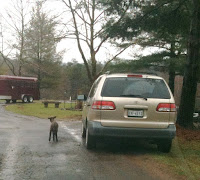 When you pull up to Fields of Athenry, you just might see a small lamb trying to go home with a shopper. Inside the retail space around back, goodies galore. Raw milk cheeses, Amish butter. Meat from cows, pigs and sheep raised on pasture, processed weekly to exacting standards. Fridges full of cuts of meat that fill my head with fancies. 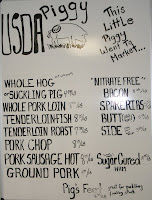 First stop, ossobuco. The famous Italian dish made with veal shanks, so hard to come by around these parts, unless one plans ahead and orders them from the butcher (not my strong suit). But here they were, fat, juicy, local, pasture raised veal shanks, for the taking. 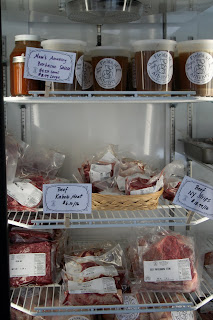 Ossobuco
Adapted from The Best of Italy (This is one of those pretty little cookbooks that friends and mothers pick up at the register at bookstores to shove in your stocking. I have tried umpteen Ossobuco recipes, from Rao to Batali and back, and this is the most simple, most reliable I've found.)

Preheat oven to 350 degrees.
In a heavy pan or ovenproof casserole over medium heat, heat 1 teaspoon of oil and 1 teaspoon butter.
Dredge the veal in the flour, and sprinkle the meat with salt and pepper. Brown the veal on both sides and remove to a platter. Heat another teaspoon of butter and one of oil and repeat until all shanks are browned.

Pour off the fat from the pan but leave the drippings. Add the last teaspoon of butter and one of oil and cook onion, celery, carrots and garlic over medium heat, stirring occasionally, until soft, about 5 minutes. Add wine and reduce for 1 minute. Add stock, tomatoes, herbs, salt and pepper. Return veal to the pot and bring to a simmer. Put in the oven and braise for about 1 1/2 - 2 hours or until tender.

For gremolata: Put lemon rind, parsley, and garlic in a mini chopper and whiz.

When veal is tender, remove shanks to a platter. Reduce the sauce over high heat until desired thickness, about 15 minutes.

To serve: Cover a shank with sauce and sprinkle with gremolata.  Risotto is delicious alongside, or cheesy polenta.(Just buy Bob's Red Mill brand and follow the instructions, corn meal, water, salt, buono!) 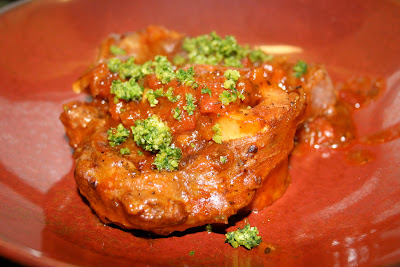