When life gives you onions, carmelize them

The last thing I am good at when I am mad is cooking. Probably since I live with the fairies most of the time, when my bubble bursts I become so focused on the pin that putting the meatloaf in on time seems trivial, if I even think of it at all. The onions whiz too long in the food processor -- doesn't it feel good to pulverize something! -- and once I get it in, I cook it higher than the recipe calls for so it is mushy on the inside from the watery onions, and burned to a shell outside. I forget the potatoes absolutely, having to pop them in the microwave then throw them in the oven at the last minute, not nearly long enough to satisfactorily crisp the skins. Despite following my grandmother's recipe, which I have made hundreds of times, the pie remained runny right through to the next day.

Everything was a bit off.

This is when it is a good time to make onions. Carmelized onions make everything better. They are the ultimate comfort food. On eggs. On toast. On steak or hamburger. The sweet, baked in goodness they earn after hours over a low flame somehow soothes the soul. It takes a long time to make good carmelized onions, but all you have to do is stir them.

My friend Phil taught me this.

He knows a lot of things, like the words to every Beatles song,  and  Yankees' stats from before his time. When you are complicating something he is apt to mutter something about Rube Goldberg. And after producing "Made In Spain," a PBS special with Jose Andres, (http://www.josemadeinspain.com) he knows from cooking.

Sunday mornings at Phil's have always been a treat. First off, there is the Sunday New York Times. Now, where we live, the New York Times doesn't show up until late morning, and you have to drive 15 minutes to fetch it, at that. You have to really want it. But if we spend the weekend with Phil, the New York Times is dropped off by the New York Times Fairy at 0'dark-thirty, and is there when you crack open the door to the day. You can get it in your slippers. (Actually, we can get it in our town in slippers too, but people nearly always point and talk.) And there is an entire Room for Building Trains, which is separate from the Coffee Drinking and Newspaper Reading Room. This makes Sunday morning way different from at our house, where all of these activities coexist. (Sans paper.)

And since Jose there is the omelet, with pancetta and carmelized onions, one of the nicest gifts I have ever received. It is firm outside and fluffy in, with flecks of salty pancetta and sweet onions floating about. 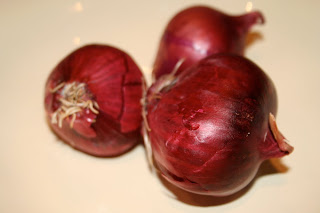 When I saw these sweet little organic red onions, I knew I had to Phil them. They are like little personal onions, just enough for a salad, or an omelet for two. Phil makes mass quantities each weekend, liking to have them at the ready for mini Philly cheese steaks (couldn't you just have guessed!) or for dabbing on roast meat or a slab of cheese. When I called to ask his onion secrets, the conversation went just like what you would imagine when you are dealing with real people's cooking methods.

ME: So how do you make those yummy onions?
P: Very simple. You put a bunch of oil in the pan...
ME: How much?
P: A little more than you think...
ME: How much?
P: Hmm. Four tablespoons. Over low heat.
ME: How low?
P: Low.
ME: So low you can't see the flame?
P: That would be too low. Lowest possible flame before it goes out. You cut up an onion. I do two, two gigantic onions, they shrink down so much.Toss the onions in the pan with the oil.
ME: I have an electric cooktop. Can I do it?
P: I forgot you do electric. [sighs] OK. If after ten minutes the oil bubbles and they brown, it is too high. If after 20 minutes nothing is happening it's too low. You cook them forever.
ME: Forever?
P: An hour. I've forgotten about them for over one and a half hours. I get up on Saturday, put on the onions, we make breakfast, read the paper, whoever walks by stirs them. Then suddenly we have onions for the weekend. It's not at all an exact science. It's very forgiving.

Slice onions thinly. Put a large heavy skillet over low heat (see above) and add oil. Toss onions with the oil and let carmelize, stirring occasionally (also see above), for about an hour until golden.
Posted by Lydia at 6:48 PM