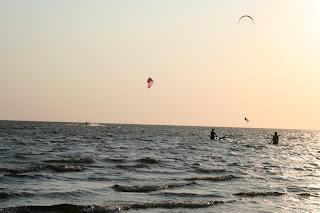 It has been a million years since I windsurfed, so long that windsurfing is nearly obsolete. The new craze (at least from where I am sitting right now, which is on a porch overlooking the sound in Waves, NC) is kiteboarding, a sport that involves flying a kite bigger than my bathroom while riding a board the size of a bathmat. When the riders turn, at times, they cause the kite to launch them into the air so high that were there a house in the sound, they would jump it. This is handy if you find an old-school windsurfer, such as my husband, in your path -- one dude easily cleared him.

It is a beautiful site. 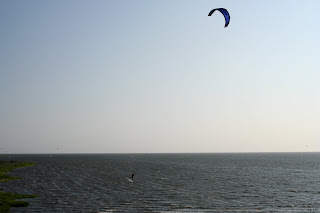 So was this cake, made with the last of our canned peaches from last year, though the first of South Carolina's summer peaches are already available here. All are gathered to celebrate a birthday, which I cannot do without cake, so I imported my own gluten free creation. The filling and the cake were made just days ahead and traveled perfectly; the frosting I whipped just before assembly. 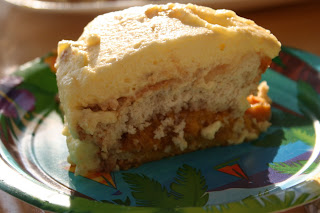 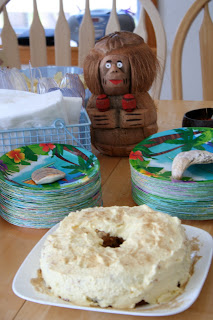 I inadvertently grabbed coffee extract when making the peach filling (I initially intended vanilla) and will not ever do otherwise now. The confluence of it all was fabulous, the peaches just touched by coffee, melding into the softness of the Angel Food, making it dusky as twilight, with a light breeze of whipped cream. It was gone before the traditional cakes were even out of the refrigerator; no one seemingly the wiser.

Separate eggs and reserve yolks for another use (I made chocolate mousse, which was completely delicious but which I cannot blog as I used up all the leftover chocolate bits and bobs left from Christmas and Easter, which I hide and hoard so my son won't eat it all at once.)  Put cream of tartar and 1/4 cup sugar in mixing bowl with whites and whip until stiff peaks form.

In another bowl, sift flour, xanthan gum, salt and sugar. Fold into whites with vanilla. Pour into angel food cake pan and bake for 50 minutes at 350 degrees.

Invert on a glass bottle and let cool before untinning.

Simmer over low heat until peaches break down and filling is the consistency of jam.

Whip in a bowl until stiff peaks form.

To assemble: Cut cake in half lengthwise and fill with peach jam. Replace top of cake and frost. Serve with a Tiki God, if you wish.