Breakfast with the eagles 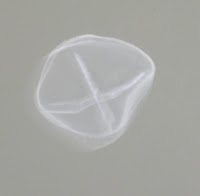 We were lazily watching a tiny, transparent jellyfish float aimlessly through the water. Anyone for breakfast? I asked, even though I was not particularly hungry. It was, however, time for breakfast, having already had coffee/tea, read books and observed jellyfish this morning. The mountains rose from the bay wreathed in snow and bathed in sun. An eagle circled once, twice, then perched and watched us from a tall hemlock. 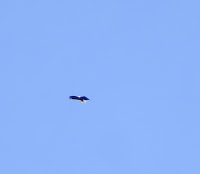 Hash browns, made from scratch, challenged the Captain, eggs and bacon. Well, I had seen a box of redskins below deck, and the remains of a packet of bacon in the fridge. Eggs and yogurt we kept on the back deck; it was cool enough out there, and saved room in the fridge.

I can do that, I retorted, heading for the galley.

I far prefer grated hash browns, and this is because they stay more moist than cubes of potato. I like the runny yolk to soak the golden potato chards, creating a sumptuous mess. We pinched a bit of rosemary from the on-deck herb window box as an afterthought, a glorious one at that. 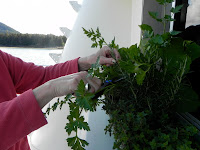 If you are cooking bacon, do so, and pour off all but 2 Tablespoons of fat. Or, melt two tablespoons of butter in a stovetop skillet.

Saute the shallot in the butter until golden; add half a teaspoon of coarse salt and lightly toss to combine. The salt may sizzle, melting and coating the skillet and shallots.

Add the potatoes and cook, turning occasionally, until golden and fried through. I like to let them cook for a while -- they clump and turn golden almost like patties. When the potatoes are nearly done, add the rosemary and cook through.

Serve with runny eggs and bacon. 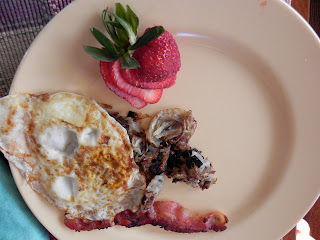