My friend John tells the story of how he decided to name his daughter Lucianna. It seems that he had a television for sale, and posted it on Craigslist. A woman with a lovely accent called to inquire, and they arranged to meet. When she came to see the TV not only was she Italian, but smoking hot and surrounded by a posse of like-bodied women, who toted the television right off in their pick-up.

Her name, as you might have guessed it by now, was Lucianna.

So when it came time to name his daughter, he thought of the beautiful Italian with the cool friends who had come, obviously, as backup in case he was some kind of Craigslist creep. His wife was conveniently out that afternoon, so it's no good to doubt the veracity of this account, but it is a fine story, albeit an unusual way to come up with a baby name. (Though I'm thinking it would make a fabulous advertisement for Craigslist, or maybe for Budweiser.)

Beautiful, though, and decisive, both admirable traits. Much like the night that their neighbors in Seattle brought over some fish tacos to try; John wrangled the recipe out of them on the spot. You'll see why. The batter is crunchy yet light, fried in oil heated on a grill that is so hot it hasn't time to get oily. It also makes clean up easier than frying in the kitchen, though I suppose it could be done that way. Likewise the sauce, mayo mixed with jalepenos, thinned with water. Use a fish that will hang together, like halibut -- the night they cooked it for me, he used some flounder, too, which didn't please the chef. I thought it was all good. Simple, and decisive. 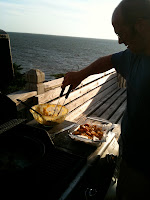 Mix egg, mustard and salt, add cornmeal slowly and beat to the consistency of pancake batter.

Heat about 2 cups of oil in a dutch oven on a hot grill. Cut fish into strips or squares, batter and fry until golden. 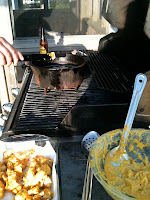 chop jalapenos and add to mayo.

Perch the fish, sauce and whatever else you want, (we had shredded cabbage) on a corn tortilla,  or flour if you can and wish. They also made a sauce of avocado and tomatillo, which was just "a ton of avocados, in a blender, with tomatillos." 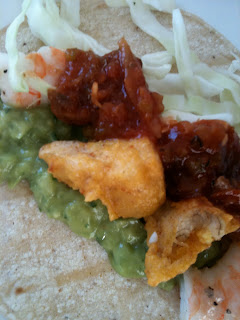