Tip Eleven: Go with your Gut

This week, my child's school is having "No TV Week." Each child that eschews the electronic monster, writes a statement to that effect and turns it into the powers that be will get an ice cream cone.
My child doesn't watch TV during the week anyway (he has boundary issues, so we just don't deal with it), so for him this is a no-brainer. I'd love it if it the reward were something more healthy, but I guess carrots might not incite the same level of participation.

But it got me thinking. We've been concentrating here on adding -- fish, water, vegetables, what have you -- and yet being virtuous nearly always means you have to give something up. And generally something you care deeply about.

For me this would be cashews. I've admitted that before. And lately I've taken to roasting them with Macadamia nuts and walnuts, which makes them three times as addictive. But cashews aren't technically bad for you --  just not so easy to digest. Then I thought -- a whole week of easy on the tummy. How would that look? So I am going to give up meat this week.  And sugar, which I am stretching to involve dairy, and wine.

This will be a week of whole foods, water and rest. Green smoothies for breakfast. Salads and soups for later. And at the end, I will get an ice cream cone. Just kidding. (Though I am going to a camp out and steak dinner this weekend. By then, I either shouldn't care too much about meat, or I will eat a whole cow solo. I'll let you know.)

For now, though, this tasted good. I substituted thick, juicy chunks of pineapple for meat over a base of watercress and arugula, chip chopped vegetables (asparagus, cucumber, tomato) and herbs (mint, cilantro), and squirted it with tangerine-fig balsamic, which was syrupy smooth without the added sugar of dressing. Vinegar also has the benefit of aiding in digestion -- its acid binds to toxins and help eliminate them more efficiently. 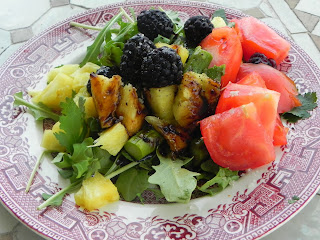