We've just returned from Alaska, which is a greater undertaking than I thought it would be. First, there is the sheer distance between here and there, and (which I also underestimated) the effect of the time change, especially on a five-year-old boy. I seriously considered Benadryl.

Second, of which I also had no idea, there is an unbelievable mind space between here and there. I thought the big deal would be living on a boat that long, having an active boy on the water so far from civilization that one small mistake could turn fatal. And that was a constant thought. 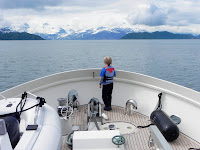 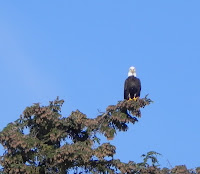 But it wasn't the big deal at all. I'm still sorting it, but the soaring eagles, the space between the water and the mountains, the smallness of you -- it makes your heart change. The absence of connected-ness to the outside world, with no cell coverage, no WiFi, no Internet, takes away a level of busyness I wasn't even aware had crept in. As when you all the sudden notice your hair has grown, when they were unavailable I realized how increasingly tied I've become to my electronic devices. Constantly checking these external benchmarks becomes a part of life which hugely detracts from the business of really living. It is so liberating not to have to worry about reading the news, having an opinion about it, making an appointment or keeping one. I realized how much thought time I squander on petty annoyances, even just  wondering why someone hasn't yet called me back. Instead, I read books, looked for whales for hours on end, took the time to really mince the garlic, not just chop it. We sat at table for hours, no one having to go home, check their e-mail or the Yankee score. 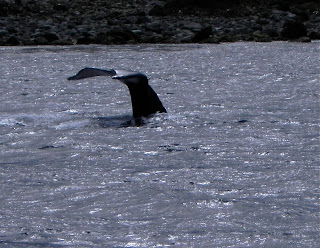 And we ate. Boy did we. Salmon the color of Easter tulips. Halibut as thick as a brick. Crab we drew up by the line. The first night at anchor, in a cove called Coot (yes, really), a day's cruise from Juneau, we dropped a "two-beer" crab trap, so called because when my friend bought the trap, the fisherman told her to leave it in, drink two beers, and pull it out. An indeterminate time really, as everyone drinks their beer at a different pace. But after anchoring, we dropped the trap (with a few salmon heads for bait) into the water. The men popped beers; the ladies poured wine (my son now calls it a "half-a-glass-of-wine" crab trap, which would probably make that salty old fisherman roll his eyes). 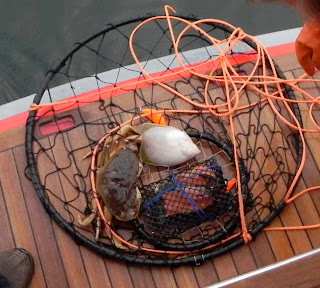 On the first pull, up came a fine male Dungeness crab, and a baby halibut. We tossed the halibut back after admiring his eyes (both on one side of his head, as they are bottom feeders) and dipped the trap in again. Four pulls, two crab and two halibut later (probably the same halibut, guess he liked salmon), and we had a wonderful addition to our planned dinner. The chicken with lemon-caper sauce got stuffed with crab. And so did we. 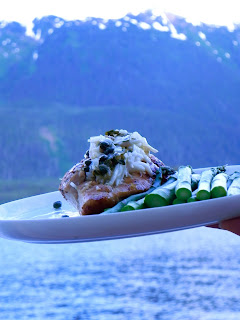 Saute shallot in oilve oil. Add rest of ingredients and simmer until reduced, about 10 minutes. Take out a few Tablespoons and mix into cornstarch; return to pan and simmer 5 minutes more, until thick and glossy.

Make two diagonal cuts in the chicken breasts to create a small cavity in the top of the meat. Saute crab picked fresh from a shell, or use canned, in butter until opaque. Saute the chicken breasts in olive oil until golden; make sure the internal temperature is adequate for your tastes, at least 165 degrees.

Place chicken on a plate and fill top cavities with crabmeat. Dress with sauce. 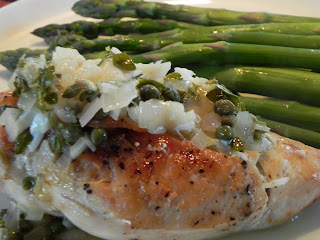